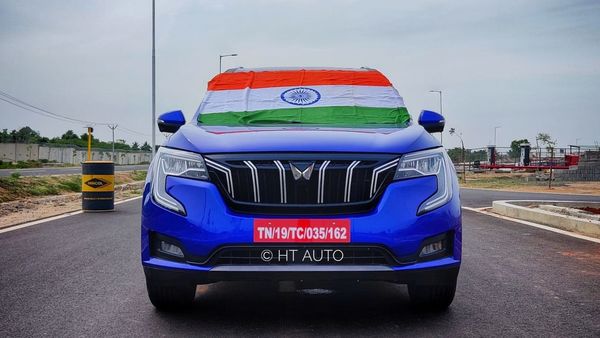 The Made in India Mahindra XUV700 will compete against a long list of rivals in the country.

Mahindra XUV700 has received 50,000 bookings in just two days since the reservation window was first opened. On Friday, the second day of the bookings' window being opened at dealerships and online, Mahindra XUV700 received 25,000 reservations in two hours. While this is mighty impressive, the upcoming SUV had reached the same figure a day earlier in a record 57 minutes.

Mahindra XUV700 is available in four broad variants - MX, AX3, AX5 and AX7. There is petrol as well as diesel engine options, with five- and seven-seat layouts. One can even choose between manual and automatic transmission options. Just earlier this week, Mahindra also announced two new variants in the form of A7 Luxury trim options with a manual gearbox and automatic transmission clubbed with AWD.

The test drives for XUV700 for prospective customers commenced in the first phase from October 2 in various cities. The second phase of test drives started Thursday onwards.

XUV700 is the successor to XUV500 and gets notable changes to its exterior profile. This is primarily highlighted by Mahindra's new logo for SUVs while the vehicle also gets a bold and aggressive front grille, LED projector headlamps with C shaped LED daytime running lights, sporty alloys and LED tail lights. There are also smart door handles that auto open and close.

Inside the cabin, XUV700 gets much-touted AdrenoX which allows the vehicle to have cutting-edge tech-based features like support for Amazon Alexa as well as a 3D immersive sound system.