Nissan Magnite has been a major success for the Japanese car maker in India, despite the long list of rivals it competes against.Nissan states 60% of the variants booked are top grade, 15% of the total bookings are for CVTs.
By : HT Auto Desk
| Updated on: 19 Apr 2021, 11:20 AM 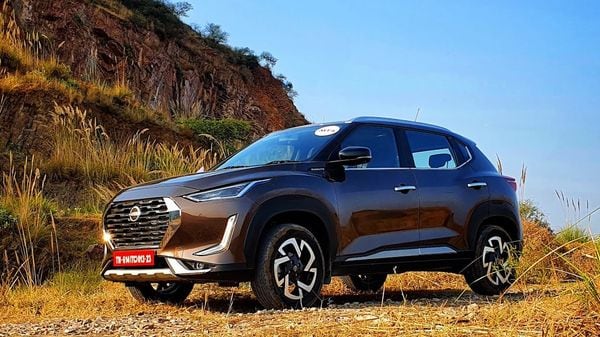 Nissan Magnite has an upright visual appeal which goes well with the segment that it competes in.

Nissan Magnite has managed to keep customers interested sine it was officially launched in the country in December of 2020. Magnite from Nissan has now crossed the significant milestone of 50,000 bookings and the demand for the sub-compact SUV remains high.

Magnite has been a runaway hit among sub-compact SUVs here and a major blockbuster for Nissan, a company that was holding on by a very fine thread in India. While its attractive - and introductory - base price was the first major talking point, Magnite has since been able to woo buyers with its turbo petrol engine option and XTRONIC automatic transmission choice. That it has decent looks and a well-managed feature list - including Around view monitor and seven-inch TFT instrument cluster- are also seen favorably by many.