Nissan Magnite deliveries hit 30,000 mark in less than a year since launch 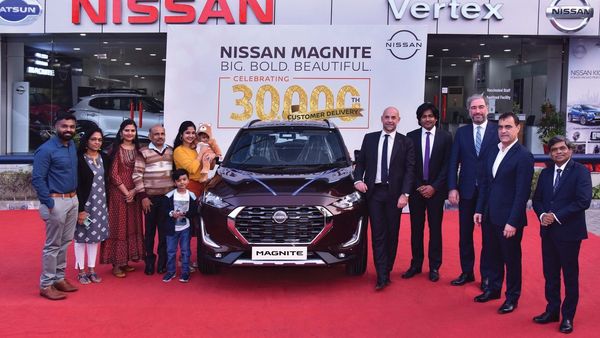 The handover ceremony of the 30,000th Nissan Magnite unit.

Nissan Magnite has been a success story for the Japanese auto brand in India since it was launched on December 2 of 2020. Despite stiff competition in the sub-compact SUV segment and other factors such as Covid-19 pandemic, recovering economy and global shortage of semiconductor chip, over 30,000 units of Magnite have now been delivered.

Nissan, in a press statement issued Friday, said that while it has so far received 72,000 bookings for the Magnite, deliveries now stand at 30,000. The 30,000th unit was handed over to a customer at a ceremony held at a Nissan dealership in Gurugram. “I am pleased to handover the Nissan Global President Award to the Nissan India Operations for the successful launch of Nissan Magnite under the Nissan NEXT transformation plan," said Guillaume Cartier, Nissan AMIEO Chairperson for Africa, Middle East, India, Europe and Oceania region. “With this car we wanted to shake up the highly competitive compact SUV segment in India."

The 'shake-up' initially may well have been due to a competitive price tag for the Magnite. Regarded by many as a do-or-die product for Nissan, the Magnite was launched at under ₹5 lakh for the base variant. Since, however, prices have been revised.

Magnite is also offered in a subscription-based model while the option of buying the vehicle is also available through Nissan's digital platform.

The Nissan Magnite gets two petrol engine options and there is no diesel on offer. Its 1.0-litre Turbo engine claims to be the star performer and pits out around 97 bhp of power and has 160 Nm of peak torque. Transmission duties are handled either by a five-speed manual or an X-TRONIC CVT gearbox.

While there is a waiting period for the vehicle, Nissan is also exporting Magnite units from its facility near Chennai. The overseas markets include Nepal, South Africa and Indonesia.