MG ZS EV and Hyundai Kona are both competing for the top prize in the rather nascent Indian electric mobility arena.
By : HT Auto Desk
| Updated on: 24 Dec 2019, 01:18 PM 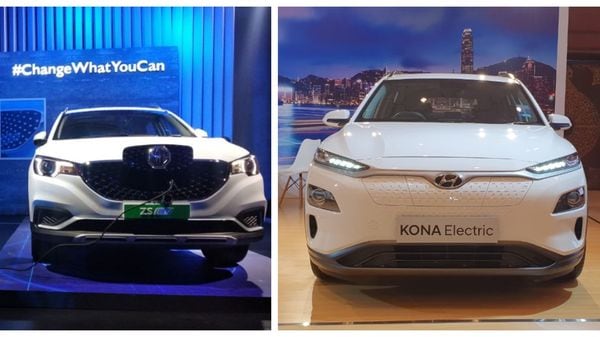 NEW DELHI : Even though the arena of electric mobiliity in India is still in its nascent stage, two players are trying to change bring about a lasting change courtesy of their offerings in the country. MG Motor recently unveiled the ZS EV and the SUV will launch officially in January of 2020. Hyundai had already brought in the Kona earlier in 2019 and will stand as the main rival to the ZS EV.

So, how do the two cars match up in a face-to-face specifications' contest?

For starters, the Kona is priced at ₹23 lakh (ex showroom) while the price breakup of the ZS EV from MG will only be known at the official launch. There are strong indications, however, that the ZS EV would be priced ₹25 lakh onwards.

Powering the ZS EV is a 44.5kWh lithium-ion battery which promises a range of 340 kilometers on a single charge. The Kona, on the other hand, has a better range at around 450 kilometers even though it has a smaller battery pack of 39.2kWh. Both companies assure quick charging using a DC unit and while MG says the ZS EV will power up to 80% in 50 minutes, the Kona does the same in 57. Both cars will also be compatible with a wide variety of charging units.

In terms of drive specifications, the ZS EV has a bit more thump with peak figures of 143 hp vis a vis 136 hp in the Kona. The Kona however has more peak torque at 395 Nm as against ZS EV's 353 Nm.

When launched, the ZS EV promises to really take the electric fight to the Kona and MG says it expects to sell around 3,000 units per annum. And while the company has gone the extra distance in ensuring that supporting infrastructure is in place and is expanding, pricing would be a key factor in deciding if the ZS EV brings about a revolution.