Kia Sonet compact SUV was unveiled during Auto Expo 2020 in February this year.Kia had confirmed to HT Auto the launch of Sonet SUV will take place closer to the festival season.
By : Sabyasachi Dasgupta
| Updated on: 23 Jun 2020, 02:39 PM 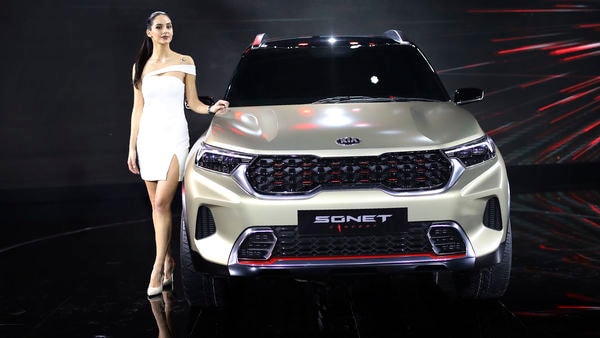 Kia Sonet was unveiled earlier this year during the Auto Expo 2020. Since then, it has caught attention of enthusiasts, and promises to spice up the competition in its segment. The compact SUV category is currently dominated by Hyundai Venue, Maruti Suzuki Vitara Brezza among others.

Earlier, Kia Motors had given the hint of launching Sonet closer to the upcoming festival season. Speaking to HT Auto in a live session, Manohar Bhat, Head - Marketing and Sales at Kia Motors India, confirmed that the launch of the car remains on track despite Covid-19-related issues. "We intend to go with our pre-existing idea of launching it in the festival season irrespective of Covid issues. Our vendors, our suppliers, everyone is on track for us to come out with the vehicle in the festive season which is August-October period," he said.

Underlining the need to offer a vehicle with a good design with features galore, apart from other key factors, Bhat said that Sonet will bring a whole lot to the table that the segment and the market as a whole has not seen so far. Among these would be a clutchless gearbox. "Sonet has a clutchless manual gearbox which is new for the segment. Basically, it will have a manual gear but won't have a clutch at all. So, it will have the fun of engaging gears without the tedium of having to press the clutch - best of both worlds," he explained.

The sub-4 metre compact SUV sports the company's signature tiger-nose grille at the front and a two-part headlight design.

Right under the headlamps, lies a pair of large air dams, while its bumper has been given a rugged look through silver elements running across.

It has a horizontal red LED strip that runs below the rear glass and links the tail-light clusters on both the sides.

Talking about the interior, Sonet comes with a large touchscreen infotainment system, climate control, phone connectivity, steering-mounted control among other features. Ventilated seats, cruise control, sunroof and wireless phone charger is available on the top variant(s) of the car.

It will come with a 1.2-litre petrol and 1.0-litre turbo-petrol. Kia Seltos' diesel engine will be carried forward.