Mahindra XUV700 to break cover on the eve of Independence Day

Mahindra has shared yet another teaser of the upcoming three-row XUV700 SUV, with the new logo, confirming that India will see the car without the camouflage officially on August 14.
By : HT Auto Desk
| Updated on: 10 Aug 2021, 07:13 PM 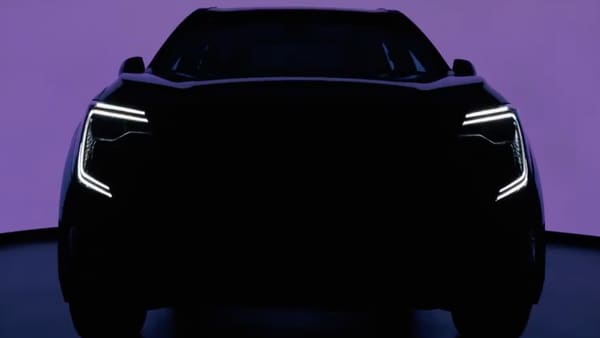 Mahindra is all set to take the covers off its upcoming flagship model XUV700 a day before Independence Day celebrations this weekend. Mahindra has confirmed the date, saying the XUV700 will break cover officially on Saturday evening.

XUV700 is one of the most-anticipated launches this year as Mahindra aims to take on Hyundai Alcazar and Tata Safari with its new SUV. The carmaker has been teasing aggressively about the XUV700 for the past few weeks, confirming several details about it.

The new teaser shared by Mahindra and Mahindra shows the XUV700 wearing the new logo the carmaker launched on Monday. The new logo, designed by Pratap Bose, the carmaker's new Chief Design Officer, seeks to underline the ability of the brand's vehicles to take on challenges.

The XUV700 will get a solid design element on the outside and Mahindra has been dropping pointers to the plethora of new-age features that the SUV will have on offer. The XUV700 SUV will come with dual-tone interior. It will feature a new UI called Adrenox, paired with Alexa on-board and the new Sony 3D sound system. The SUV will also have body-hugging seats with adjustable headrests, horizontally positioned air con vents, push-button start, new multi-functional steering wheel with mounted controls, rotary dials, huge central armrest and a cooled glovebox.

Get ready to feel the rush this freedom weekend.
Catch the debut of the Mahindra XUV700 on 14th August at 4 PM.https://t.co/e4TngqGuGD#HelloXUV700#XUV700 pic.twitter.com/1swjmn4HNo

Both engines are likely to be offered with options of a 6-speed torque converter automatic or a 6-speed manual transmission.

The 2021 Mahindra XUV700 is expected to be priced above ₹14 lakh (ex-showroom) bracket and will take on rivals like Hyundai Alcazar and Tata Safari.