Mahindra has made some mechanical and cosmetic upgrades to the SUV.

On the exterior, there is a slightly redesigned grille with six vertical slats and Mahindra's new twins-peak logo. The bumper is revised and gets a new skid plate, fog lamp housing and LED Daytime Running Lamps. The iconic bonnet scoop on the bonnet of the Scorpio has been retained. Mahindra has retained the muscular and imposing design language of the Scorpio Classic.

On the sides, there is new body cladding and smart-looking diamond-cut alloy wheels that measure 17-inches. At the rear, the LED tail lamps are the same ones. However, the black tower pillars are now finished in red. The manufacturer has also introduced a new paint scheme called Galaxy Grey.

The cabin stays the same for the most part. There is a new 9-inch Android-based touchscreen infotainment system that supports screen mirroring. On the dashboard and central console, there are wooden inserts and the cabin is finished in a black and beige combination. The steering wheel now gets piano-black inserts and a leatherette finish. There is also a sunglass holder on offer now. The seats are made up of fabric and now get diamond pattern quilted designs on them. 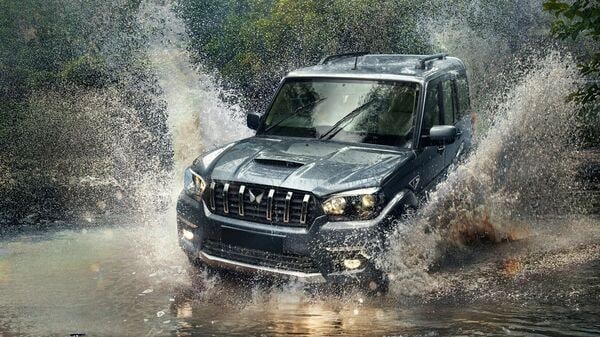 The power from the engine is transferred to the rear wheels only. The Scorpio Classic is not offered with a four-wheel drive system.

The Scorpio Classic gets the second generation of mHawk diesel engine. Mahindra has constructed the engine of all aluminium. Because of this, the engine is 55 kgs lighter. It produces 132 PS of max power and 300 Nm of peak torque. Mahindra says that the 230 Nm of torque is available from as low as 1,000 rpm. The manufacturer says that the fuel efficiency of the engine should increase by 15 per cent. The transmission on duty is a new cable shift 6-speed unit that should have shorter and positive throws than the previous generation Scorpio.

In terms of suspension setup, the manufacturer has added MTV-CL dampers to all four struts to help control body control. The suspension setup itself has been retuned also.

Mahindra has also added some features to the Scorpio Classic. They are cruise control, cornering lamps and automatic climate control.