The Lordstown Endurance electric pickup aims to rival Tesla, Nikola and Rivian with an engine in each of its four wheels.
By : Sabyasachi Dasgupta
| Updated on: 26 Jun 2020, 10:00 AM 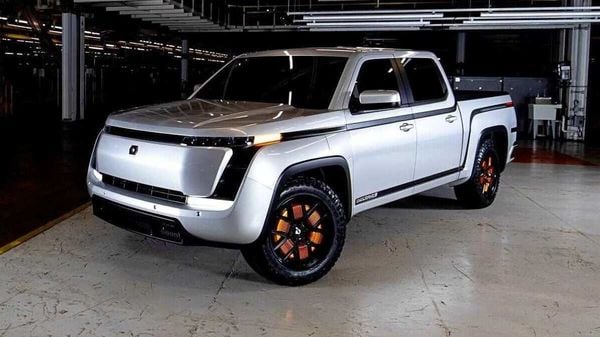 Electric car startup Lordstown Motors has officially unveiled its first model, the Endurance pickup truck. Lordstown said The 600-hp the truck will have a towing capacity of 3,400 kgs and will come at a price of $52,500 (around ₹40 lakh). The pickups will be delivered to customers in 2021.

US Vice President Mike Pence was present during the launch event. Pence was in the Endurance passenger seat as he took the stage and stepped out to give a 24-minute speech. Pence opened his speech referring to himself as a "type of truck" that is "between trucks right now," and then covered topics ranging from the USMCA to President Trump's response to the coronavirus pandemic and related economic recession.

The look and feel of the Endurance pickup truck will remind one of Chevy Silverado. The front face of the Endurance is typically electric with narrow LED headlights and an aerodynamically efficient grille section. Even from the sides and the rear the design is conservative, and is not too different from some of the competitors like Rivian and Nikola electric pickup trucks.

The carmaker did not reveal details about the interior, but it is not going to be vastly different from other trucks. Lordstown Motors is likely to use hub motors for each wheel, instead of electric motors on the chassis. It is expected to generate 600-hp of power with a torque output of 2,711Nm. Lordstown claims Endurance pickup truck, with option to fast-charge, will have a range of more than 400 kms.

During the event, Pence said that Steve Burns, CEO of Lordstown, had told him that the company expects to hire up to "800 people" for the plant by the end of 2021.

US Vice President Mike Pence speaks during the unveiling of the Lordstown Motors Endurance electric pickup truck event in Ohio on Thursday. (Bloomberg)

The Lordstown factory has been the reason why US President Donald Trump had a run-in with GM and its Chief Executive Officer Mary Barra. Trump had severely criticised Mary Barra on Twitter when General Motors put the plant on a list of factories that had no new vehicles to build and were at risk of closure. The factory was purchased by the Lordstown Motors and is now on track to revive vehicle manufacturing.

In 2021, Lordstown Motors intends to make 20 thousand pickup trucks and increase the capacity of the plant to produce six lakh cars every year. After the full-size Endurance pickup, the company wants to bring to the market a more affordable mid-size pickup truck on the same platform and a certain SUV.