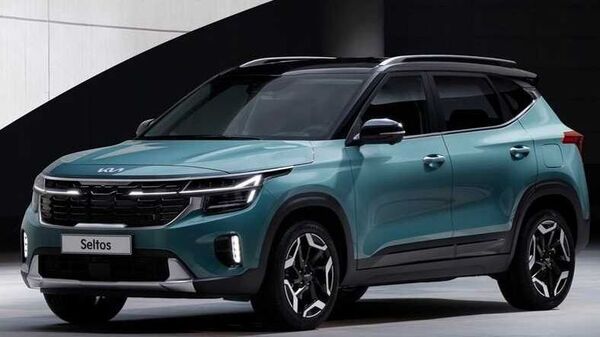 Kia Seltos facelift gets several tweaks across the exterior.

Kia Motors updated its popular SUV Seltos back in June 2019 and the car received a host of updates. Now, the South Korean automaker has updated the car again and it comes with subtle revamp attempts. The 2022 Kia Seltos facelift comes with a tweaked front fascia and a heavily updated cabin. While the exterior of the car has received a couple of tweaks, the majority of the changes have been made inside its cabin.

Moving to the back, a light bar has been introduced to give the car a wider illusion, while the taillights come with sharper styling. There is a red reflector repositioned into the plastic cladding of the rear bumper.

Moving inside the cabin, the new Seltos gets a thoroughly updated dashboard that gets a pair of 10.25-inch displays positioned side by side. A rotary dial has replaced the gear lever, which comes flanked by a couple of buttons as the outgoing model. The new Seltos also sports updated HVAC controls.

Kia has so far revealed the visual updates only. Expect it to reveal the technical specifications of the new Kia Seltos to be revealed next month. Also, Kia is likely to reveal more details about this SUV at the upcoming Busan Motor Show.

Kia Seltos has become a very successful product in India since its launch here. The Kia Seltos is still continuing to drive volume for the automaker in India, despite the launch of other models like Sonet, Carnival and Karens.