Kia K8 sedan is built on the success of K7 and will upheld the technology, design and performance of the outgoing model.Kia K8 is a sport sedan that will launch later this year.
By : HT Auto Desk
| Updated on: 17 Feb 2021, 08:23 PM 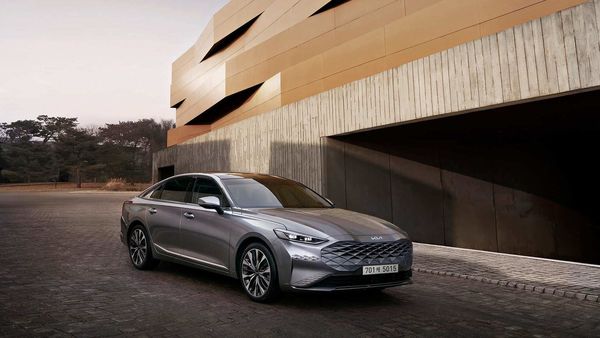 Kia K8 has been designed with inspiration from yachts.

South Korean auto major Kia Corporation has revealed the K8 premium sedan that is the first model after the automaker’s rebranding strategy was announced. The Kia K8 showcases the brand’s new design identity as well as the contemporary new Kia logo.

As the automaker claims, focusing on modern, premium quality and dynamic performance, the Kia K8 sedan shows an upmarket sports sedan that will build on the success of the K7, also known as Cadenza in some markets. The production model of the K8 sedan is expected to launch later this year.

Last month, the automaker changed its corporate name from Kia Motors to Kia and signaled that the carmaker is breaking away from its traditional manufacturing-driven business model to a mobility solution provider. It changed the brand slogan from "The Power to Surprise" to "Movement that inspires." The new brand logo is a part of the revised strategy. The new logo appears crisper than the current one and looks like a signature.

Talking about the design, the Kia K8 sedan shows a frameless ‘tiger nose’ grille with sleek LED headlamps. The front fascia reminds of the outgoing Kia models with a hint of what’s coming in the new generation models from the brand. A sleek and smooth side profile with muscular large wheels, dropping shoulders, sturdy-looking fastback rear profile are among other design elements of the car. The rear boasts boomerang-shaped LED taillights that are connected with a wide reflector strip, just below the lip spoiler.

The elongated sporty sedan measures 5,015 mm in length and claims to have taken design inspiration from yachts.

Talking about the design of the sedan, Head of Kia Global Design Center and Senior Vice President Karim Habib said that the K8 pays homage to K7 while moving towards the automaker’s new brand values. "Following our recent company rebrand, we keep moving toward our new brand values with a new model – the K8. This modern sedan has been designed with innovation and elegance at its very core," he said.

Habib also said that while paying homage to the K7, the K8 looks to the future. "Its progressive exterior takes on character and emotion, and combines those qualities with an expressive looking front and a dynamic swooping rear, giving the K8 a high-quality, premium presence that takes direct inspiration from some of the world’s most technically advanced yachts," he further added.

The cabin of this sedan is expected to be equally elegant in line with the exterior. Kia claims that K8’s cabin will be simple and ergonomic upholding the design, technology, and modernity of the outgoing K7. Also, the car is claimed to be offering a comfortable yet high-performance driving experience.