The EV6 electric car wears the carmaker's new design element.Kia EV6 is scheduled to have its global debut later this month.
By : HT Auto Desk
| Updated on: 15 Mar 2021, 09:32 AM 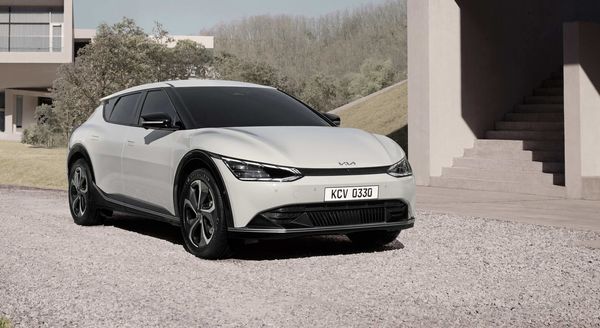 Kia Motors has revealed the first images of the exterior and interior design of the EV6 ahead of its official debut later this month. The Kia EV6 is the Korean carmaker’s first battery electric vehicle (BEV) with a dedicated platform.

In addition to being the carmaker’s first dedicated electric vehicle and the first to be built on the Electric-Global Modular Platform, which also forms the foundation for the new Hyundai Ioniq 5, the EV6 will also be the first example of Kia’s new design philosophy to be used in its upcoming cars.

Kia EV6 has a crossover-like design, unlike the recently launched Ioniq 5, which appears more windswept and streamlined. The front face of the Kia EV6 wears the carmaker’s new logo. It is also characterised by a large headlight cluster connected by a narrow grille on top. There are DRLs with sequential animation too. The overall front face wears the new design element which Kia calls the ‘digital tiger face. It is supposed to evoke the spirit of the carmaker’s signature tiger-nose grille. Though it is difficult to relate the EV6 face to a regular Kia car’s.

On the sides, there are character line running along the bottom of the door before it heads upwards to connect the wrap-around tail lights at the back. It separates the rear glass and the spoiler almost like a Jaguar I-PACE. The dark rim around the bottom of the EV6 and the wheel arches taper the shape a bit, giving the car a sporty appearance.

Inside the EV6, Kia promises to offer more space than you would expect from a car of the same size. While Hyundai has a flat dashboard design, the EV6 wraps the cockpit around the driver’s seat, integrating a large digital instrument cluster and the central infotainment screen into a curved black dashboard. In front of the driver is a two-spoke steering wheel. Between the front seats is a floating two-storey centre console, which houses the start button, the rotating gear lever and what appears to be a spacious storage compartment too.

The details about the powertrain, battery pack or the range the EV6 can generate is still kept under the wraps by the carmaker so far. However, according to reports, the Kia EV6 specifics is unlikely to be too different from that of the Hyundai Ioniq 5. Hence, a single and dual electric driver motor is expected for EV6 which has a capacity of producing around 300 hp of power and 600 Nm of torque and a possible range of nearly 480 kms on single charge. All these details will be revealed when the car makes its global debut later this month.