The the twin headlight strips at the front makes the Genesis X stand out and gives ample hint at how the future cars from the brand may look like.
By : HT Auto Desk
| Updated on: 31 Mar 2021, 15:41 PM

Genesis has unveiled the new X Concept. The electric coupé, dubbed "the quintessence of sustainable luxury", embodies the latest version of the Athletic Elegance design concept. Perhaps this is how all serial electric vehicles of the brand will look in the future.

The Genesis X is the fifth Genesis Concept to showcase their vision for a large GT coupe. One of its features, in addition to the long bonnet and raised embossings, is the seamless bonding of the bonnet and fenders, which should minimise the number of cracks and openings and improve aerodynamics.

Genesis X is a large, two-door, four-seater Gran Tourer, which is unlikely to be seen on the streets in a similar form. However, it gives a hint at what the next models of the brand will look like and get users used to the most characteristic design element - the twin headlight strips at the front.

The car showcased has the unique colour Lencois Blue, named after the lagoons in one of the Brazilian parks, which has long attracted ecotourists for its nature and beauty. 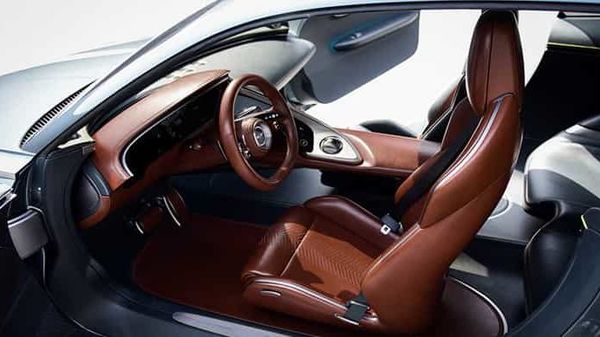 The interior of the Genesis X concept car is as interesting as the exterior.

The interior of the concept car is as interesting as the exterior. The driver's seat has a different colour than the others. Genesis boasts that the upholstery is made of scraps of leather used in the production of elements in other cars. The cockpit surrounds the driver in a very clever way. The shape of the cockpit combined with the colour of the seat creates the impression that this interior is designed with the driver in mind, and with some space left, there is also a seat and a couch for passengers.

The dashboard of the Genesis X has an intricate curved display with a visor, smoothly turning into a touch-sensitive centre console. It also has an unusual transmission selector Crystal Sphere, which in parking mode turns around.

On a technical level, Genesis X will be an electric car, possibly built on the E-GMP modular platform of the Hyundai-Kia Group. Its modular architecture would allow a large battery to be installed under the cabin and to mount one or two electric motors.

Whether such a concept will go into production is still unknown, but electric cars as such in the Genesis lineup will definitely be.