Hyundai's popular models like Creta and Venue SUVs have long waiting periods, which is also affecting in sales, due to the ongoing chip crisis.
By : HT Auto Desk
| Updated on: 02 Apr 2022, 09:42 AM 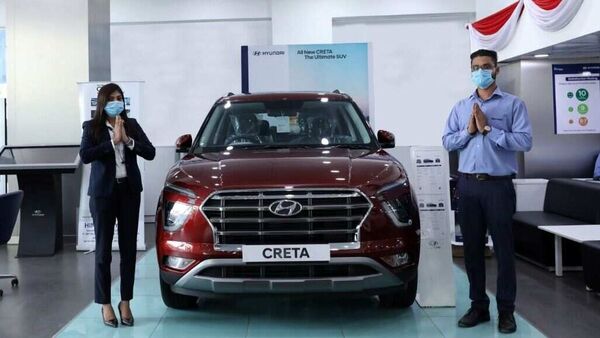 Hyundai Motor continues to be the second largest carmaker in India, but just about. The carmaker's sales tally has been on a decline for the past few months. In March, the Korean car manufacturer registered a drop of 14 percent in sales compared to the same month last year. Hyundai sold 55,287 units last month, as it continues to struggle with ongoing chip shortage crisis like other carmakers.

Hyundai had sold 64,621 units back in March last year. However, considering month-on-month performance, there is a slimmer of hope for recovery. In February this year, Hyundai had sold 44,050 units, compared to 55,287 units last month, which is a jump of more than 25 percent.

In February too, Hyundai witnessed a similar dip in sales. The carmaker sold 44,050 units in the domestic market in February, down from 51,600 sold in the same month in 2021.

Hyundai's struggle with chip crisis continues as waiting periods for its flagship cars keep extending. Creta and Venue SUVs, which form a huge part of its overall sales, have waiting period running into months. Alcazar, Hyundai's three-row SUV, has a lesser waiting period. Despite the popularity of its SUVs and hatchbacks, Hyundai has not been able to translate them in solid sales numbers due to the ongoing crisis.

Hyundai is expected to launch new cars this year. It is likely to drive in the facelift versions of both Creta and Venue this year, besides upgrading the Tucson SUV as well.