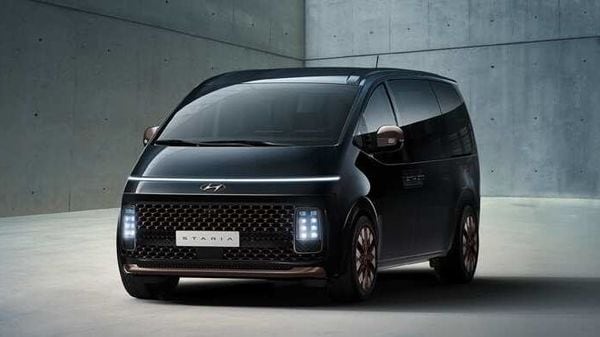 Photo of Hyundai Staria MPV released by the carmaker.

Nearly a week after teasing its upcoming MPV, Hyundai has revealed clearer pictures for the successor to its Starex MPV called the Staria. The design of the new Hyundai Staria MPV have been completely revamped compared to Starex, and now look more modern. Hyundai will officially showcase the new MPV at a digital world premiere later this year.

The teaser images of Staria MPV that Hyundai shared earlier showcased its frontal styling and its side and rear silhouette. In the new images, the styling is now as clear as daylight. It appears quite modern, defined by a flowing curve running from front to the back of the vehicle.

At the front, it wears horizontal daytime running lights, which together extend over the entire width of the vehicle. The DRLs flank a wide, honeycomb grille at the front. It also has chrome strips around the LED headlights and the tinted brass on the Hyundai logo on the front. The Staria MPV stands on 18-inch wheels.

At the rear, one would find vertical taillights and a wide rear window. The tail lights have a parametric pixel design, which will definitely remind of the light pattern on the Ioniq 5. The lip of the boot is set low to make loading and unloading easier.

Hyundai says the interior of the Staria is inspired by the cruise ship’s lounge. It is inspired by the traditional Korean architecture known as Hanok which try to create a living space for the coexistence of humans and nature. It can be seen when one steps inside the Staria. The lowered belt lines and the generous panorama windows on the sides improve the all-round view and leave a feeling of freedom.

Like its exterior design, The Staria is also quite modern from the inside. There is a fully digital cockpit highlighted by a 10.25-inch display on the front and a centre console with touch function. The digital instrument cluster is located on top of the dashboard and offers the driver an unobstructed view of the traffic situation.

The Staria will also have ambient lighting with 64 different adjustable colour options. The light will cover can the cockpit, the floor area as well as the door and interior panels.

Hyundai says that the Staria has been developed as an MPV (Multi Purpose Vehicle) for both family use and commercial purposes and offers next-generation intelligent mobility solutions with a high level of driving comfort.