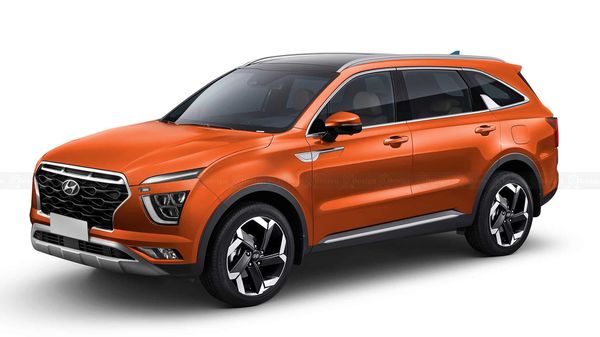 Hyundai has reportedly started bookings for its upcoming 7-seater SUV Alcazar. The Korean carmaker recently released sketches of the Alcazar SUV to give an idea of what is seen as a bigger version of Hyundai's immensely popular Creta SUV.

According to reports, the bookings have begun at dealership level. The booking amount for the Hyundai's upcoming SUV Alcazar is ₹50,000. The bookings can be done through dealership and online mode. Hyundai plans to start its delivery in June.

The Alcazar SUV will be larger in length than the Creta in terms of seating, allowing better comfort for occupants. Ass far as design is concerned, the front face of the SUV has LED daytime running lights projector headlamps. It also gets a new roof mounted spoiler with 17-inch dual-tone diamond-cut alloy wheels, twin exhausts at the rear, new-look LED taillights and much more. Some of the design elements seems to have been borrowed from Hyundai’s global 7-seater SUV Palisade.

There is not much detail available about the interior of the Alcazar SUV. However, it is expected to come with a large infotainment screen, a flat-bottomed steering wheel, silver inserts on the dash and doors as well as plenty of storage space all around. The touchscreen media is expected to support Apple CarPlay and Android Auto. Besides these, the Alcazar SUV is also likely to feature a multi-zone climate control, wireless charging, air purifier, panoramic sunroof as well.

Hyundai is expected to launch the Alcazar at a price ranging between ₹14 lakh and ₹20 lakh (ex showroom). It is likely to bridge the gap between the Creta and Tucson SUVs. When launched, the Alcazar SUV will take on the likes of MG Hector Plus, Mahindra XUV500 and the newly-launched Tata Safari.