The latest generation Honda HR-V hybrid SUV was recently introduced by the Japanese carmaker. The SUV faltered at in children safety parameters which was not as robust as expected by the agency.
By : HT Auto Desk
| Updated on: 13 Apr 2022, 03:55 PM 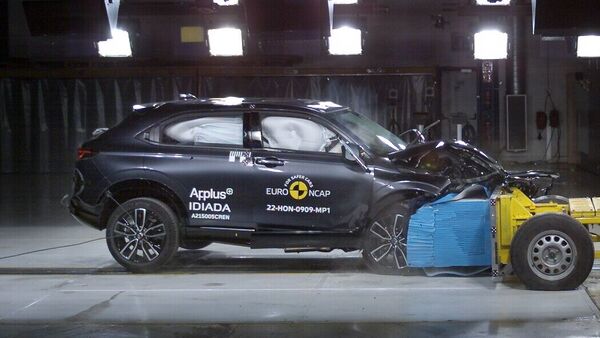 Honda HR-V hybrid SUV has secured four-star ratings at the Euro NCAP crash tests held recently. The SUV went through the recent Euro NCAP crash tests along with other cars like DS 4 hatchback and Dacia Jogger. The latest generation of the Honda HR-V achieved a fairly complete score, but the restraint of the children sitting behind in the crash tests was not what was expected. This caused the safety rating of HR-V to drop to four stars.

Honda recently introduced the HR-V Hybrid model in some of the markets. The Japanese carmaker offers HR-V Hybrid with a 1.5-litre petrol engine and a lithium-ion battery with two electric motors. The SUV’s engine and electric motor together can generate 109 PS of power. Apart from the hybrid version, this SUV is also available with a natural aspirated 1.5 litre capacity natural engine that generates 121bhp of power and 145Nm of torque.

In the offset crash test, the Honda HR-V SUV demonstrated good compatibility with other cars. The agency found the SUV's front occupant protection acceptable. In the full frontal crash test, the pressure on the rear passenger's chest was found to be medium.

The highest score for the Honda HR-V came during the side crash tests. However, the lack of the central airbag did not allow it to get the extra score. The agency concluded that the side impact restraint on the opposite side can also be improved. The SUV also scored well during testing of whiplash effect in rear-end collisions. In the offset crash test the child seatbelt slipped from the shoulder while during the lateral test the head protection was found at the limit of survival.

The front of the Honda HR-V protects pedestrians well in the event of an investment, only the pelvis is at risk, due to the extreme stiffness of the edge of the hood. The autonomous braking system performs very well in recognizing pedestrians and cyclists. The system also works well towards cars. The speed limiter with signal recognition, the warning for unfastened seat belts and lane maintenance are standard on all Honda HR-Vs. Pilot fatigue monitoring is missing.