Honda teased the rear section of the Civic Si which reveals that the car will get a red SI badge, darkened taillights, black spoilers and an exhaust pipe integrated into the bumper
By : HT Auto Desk
| Written By : Sabyasachi Dasgupta
| Updated on: 19 Oct 2021, 04:00 PM 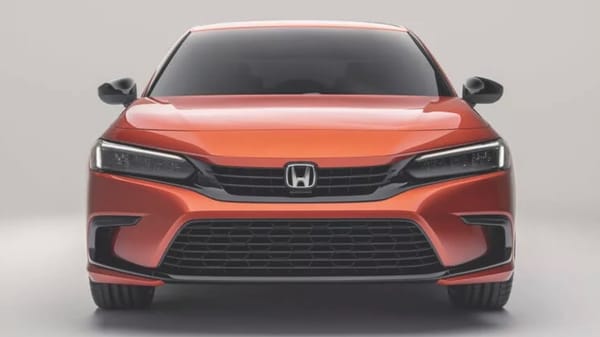 The new Honda Civic Si will take on rivals like the Hyundai Elantra N Line, Volkswagen Jetta among others.

The Honda Civic family is set grow bigger today as the Japanese carmaker gears up for yet another model. The 2021 Honda Civic Si is a sedan-based model, and it comes after the carmaker launched the sedan and hatchback version of the car earlier.

The 11th generation, four-door sporty Civic Si will make its global debut as an ICE vehicle, days after Honda revealed its new line of electric cars to the world.

Ahead of the global unveiling, Honda teased the new Civic Si on its social media handles. The teaser image shows the rear section of the Civic Si which reveals that the car will get a red SI badge, darkened taillights, black spoilers and an exhaust pipe integrated into the bumper which gets chrome garnishing.

In images shared earlier, the Honda Civic Si appears quite sporty from the front. The grille is narrow with sleek LED headlights and DRl units lending a sharper look to the car. The black skid plates is one integrated unit which extends to the edge of the length creating the housing for the air intakes. The air intake under the grille is large too.

The interior of the new Honda Civic Si is unlikely to get too many changes compared to the sedan version of the car. It is expected to get sportier seats with red accents. The red accents are expected to be present in other parts of the cabin for a sportier look. It is also expected to get a bigger and improved touchscreen infotainment system than the one seen in its predecessors.

Honda says that the new Civic Si will be the ‘most fun-to-drive’ car, hinting at its sporty character. Under the hood, the Honda Civic Si is expected to get the same old 1.5-litre four-cylinder turbo engine. Honda may give the engine a few tweaks for the new generation model. The engine is capable of producing maximum output of 205 hp and 260 Nm of peak torque. However, it remains to be seen if the engine and power delivery remain the same in the new generation Civic Si when Honda takes the covers off later today. The engine is likely to come mated to a six-speed manual gearbox.