The orders underscores the hard-to-resist nature of announcing deposits, even when they are fully refundable and may never be converted into actual sales.
By : Bloomberg
| Updated on: 25 Nov 2019, 09:14 AM 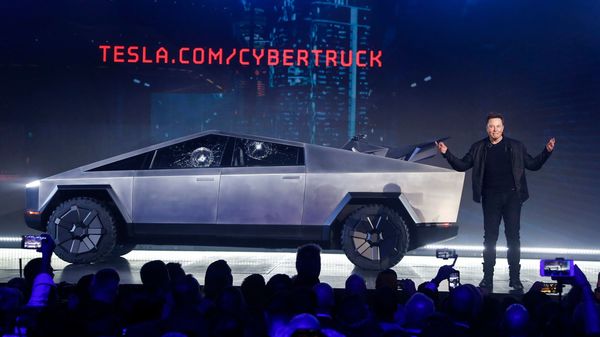 The electric-car maker has a history of unveiling future products to throngs of excited customers, taking deposits, and then delivering years later. Two years ago, Tesla showed off a Semi truck and a next generation Roadster sports car, but neither vehicle is in production yet. This spring, Musk unveiled the Model Y crossover; that vehicle is slated to begin production next summer.

The orders, an increase from a 146,000 figure that Musk announced in a Tweet on Saturday, underscores the hard-to-resist nature of announcing deposits, even when they are fully refundable and may never be converted into actual sales.

Tesla’s reservation list has long been a source of intrigue for investors, analysts, journalists, fans and skeptics of the company, as it’s often used as a proxy for demand. Musk’s tweet breaks with the recent practice at Tesla, which has stopped giving reservation figures on its quarterly earnings calls, saying the metric wasn’t relevant.

“We don’t want to comment on the granularity of deposits -- again, people just read too much into those," Musk said on Tesla’s first-quarter earnings call in April, when asked about the Model Y.

Tesla’s website allows customers to order the truck for a fully refundable $100, and says they can complete their configuration “as production nears in late 2021." Musk said in a tweet Saturday that 42% had ordered the dual-motor option, which starts at $49,900, while 41% have ordered the $69,900 triple-motor option, production of which is expected to begin in late 2022. Just 17% ordered the single-motor version, which begins at $39,900.

The $100 deposit for the Cybertruck is far cheaper than the $1,000 that was required to reserve a Model 3 sedan.

“Reservations are not relevant for us," former Chief Financial Officer Deepak Ahuja said in January, during the company’s 2018 fourth-quarter earnings call. “Now we do have a large reservations backlog still, which tells us that a lot of customers are still waiting for those cars. But I don’t think it’s appropriate to share the reservations number."

Tesla never released an order or reservation figure for the Model Y. The company had $665 million in customer deposits as of Sept. 30, according to a regulatory filing.

In a demonstration of the truck’s toughness, long-time Tesla lead designer Franz von Holzhausen whacked the Cybertruck’s stainless steel door with a mallet, showing that it couldn’t be dented. But when he threw a metallic ball at the driver side front window, it shattered.

So von Holzhausen tried a second, softer throw -- this time targeting the truck’s rear window -- only to see that shatter as well.

It wasn’t immediately clear who supplied the glass or if Tesla made what it called “Armor Glass" completely in-house. Tesla entered the glass technology business back in 2016, and has an internal group known as Tesla Glass.

Musk said his team threw the same steel ball at the window several times before the event and didn’t even scratch the glass. Late Friday, he tweeted out a short video of von Holzhausen that has been viewed more than 6 million times.

The angular, futuristic design and the shattering glass generated enormous publicity for Tesla and its truck, but shares tumbled 6.1% to $333.04 Friday, the sharpest decline in almost two months.