Ethanol-blended petrol is widely used in the US and Brazil considering it as a cleaner fuel alternative compared to straight petrol.
By : HT Auto Desk
| Updated on: 22 Feb 2022, 07:47 PM 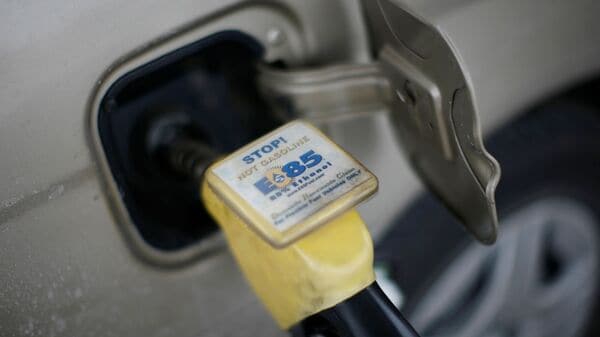 Ethanol is basically ethyl alcohol that is made from molasses, grains and farm waste.

Corn-based ethanol, which for years has been mixed in a huge volume into the petrol sold in the US is at least 24 per cent more carbon-intensive compared to conventional petrol, claims a study. National Academy of Sciences has found in one of its studies that corn-based ethanol is a much bigger contributor to global warming than petrol because of the emissions resulting from land-use changes to grow corn, besides processing and combustion as well.

(Also Read: Why Tata Motors is keen to launch hatchbacks and sedans with CNG, but not SUVs?)

This comes contradicting the findings of a 2019 study conducted by the US Department of Agriculture that claimed ethanol's carbon intensity is 39 per cent lower than petrol. However, the study underestimated the emissions impact of land conversion.

Ethanol and other biofuels are usually considered relatively green, which is why several countries have been pushing the automobile manufacturers and energy industry to adopt ethanol-blended petrol, which would reduce carbon emissions significantly. Ethanol is widely blended in Brazil and the US currently. India too is aiming to become one of the major players in terms of ethanol-blended petrol use. In fact, with India's aim to achieve higher ethanol blending in petrol, the country could become the third-largest in the world in terms of ethanol use in mobility fuel.

However, while Brazil majorly uses sugarcane-based ethanol and India too is focusing on the same type of ethanol, the US relies on corn-based ethanol. US President Joe Biden's administration is reviewing policies on biofuels as part of the country's effort to decarbonize its economy by 2050 to fight climate change.

US government in 2005 enacted a law enforcing the country's oil refiners to mix some 15 billion gallons of corn-based ethanol into petrol annually. The study claims that this mandate pushed corn cultivation by 8.7 per cent and expanded into 6.9 million additional acres of land between 2008 and 2016, resulting in widespread changes in land use. This has resulted in the release of trapped carbon from the soil while applying nitrogen fertilizers or other farming activities produce emissions.