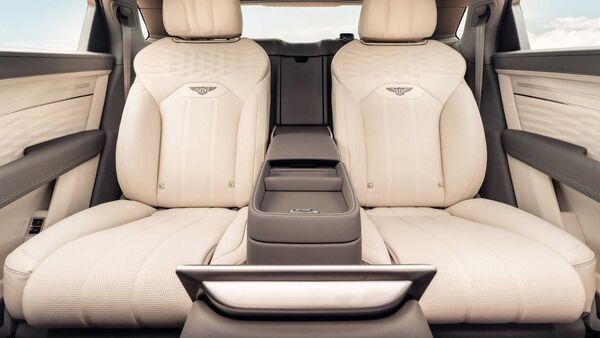 Bentley has unveiled the interior of its Bentayga EWB limousine SUV, which comes with a gazillion ways of cabin customisation. The Bentley Bentayga EQB takes the luxury quotient inside its cabin a few notches up than the standard model. The highlight inside its cabin is the airline seat which is claimed as the most technologically advanced seat ever made for a car. This seat gets a combination of twelve electric motors and three intelligent pneumatic valve electronic control, both controlled by an ECU.

(Also Read: Five new cars in India to watch out for in July)

With a dozen motors powering the airline seat inside the cabin of the Bentley Bentayga EWB limousine SUV offers 22 ways of adjustments. These ensure the utmost comfort for the occupants, claims the British luxury car marquee. The airline seat is claimed as controlled by a master seat motion & wellbeing ECU. Also, the Bentayga EWB's airline seat has two major unprecedented in-car technology on offer, which are auto climate and postural adjustments.

Auto climate control is the world's first seat surface sensing system for thermal comfort, claims Bentley. It works like the typical cabin climate control, which in this case is specific to the seats. The passenger may set the setting in seven ways, with the neutral position (0) delivering optimal comfort based on trials involving different passengers and different environments. The airline seats come equipped with a wide range of sensors at various places that detect a passenger's body contact and the surface temperature along with humidity level.