Auto Expo 2020: All you need to know about Seltos X-Line concept unveiled by Kia

Kia X-Line concept is the rugged variant of Seltos.It debuted at Los Angeles auto show in 2019, with a more powerful engine.The Indian concept doesn't get much change in the spec sheet.
By : HT Auto Desk
| Updated on: 07 Feb 2020, 04:35 PM 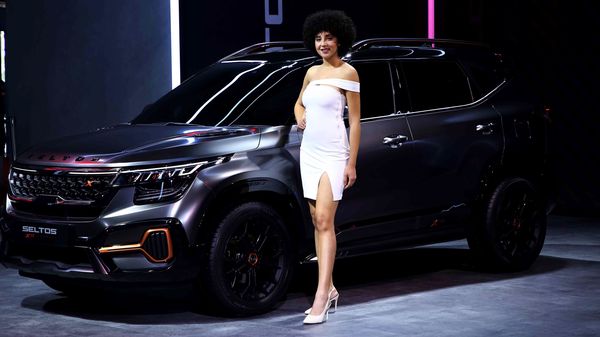 A model stands next to a Seltos X-Line concept launched by KIA Motors at the Auto Expo 2020 in Greater Noida on Thursday.

GREATER NOIDA : Kia Motors hosted a bunch of cars at Auto Expo 2020 which it plans to roll out in the Indian market in coming months. While the Carnival is the biggest of the upcoming lot, a new concept car unveiled by Kia ups the benchmark in compact SUV battle.

The X-Line is a more rugged variant of the Seltos, Kia's best-selling car in India. The X-Line gets a new aggressive front and roof rails which accentuate the masculine feeling of the Seltos.

It also gets tyres which, through the deep treads, are capable of off-roading. The X-Line also gets a black trim instead of chrome in the existing Seltos which extend to the rear as well. The rear of the car also gets an aggressive bumper.

The Seltos X-Line had debuted at the Los Angeles motor show in 2019. There, the company had introduced it with a 1.6-litre turn-charged engine which was capable of generating 177PS power.

The one introduced in India at the 15th Auto Expo, however, doesn't get the technical upgrade. It is placed above the most powerful variant currently available, the GT Line which has a 1.4-litre turbo-charged petrol engine capable of generating 140PS power. The X-Line concept uses the same engine.

The car also has a higher ground clearance, making it ideal for off-roading.

There is no word from the company about the India launch of the Seltos X-Line.

It had also unveiled Sonet at the Auto Expo that will go against the likes of Ford Ecosport, Tata Nexon and Maruti Suzuki's Brezza.

The company had said earlier this week that its wholesales in January stood at 15,450 units.

The company despatched 15,000 units of Seltos and 450 units of Carnival to dealers during last month, Kia Motors India said in a statement. Carnival was also launched at the Auto Expo at a price of ₹24.95 lakh.

The company said it has already received 1,410 bookings on the first day of Carnival's pre-bookings acceptance on January 21, 2020.

Kia has sold 60,494 units of Seltos in just five months of launch, the company added.

With 15,450 unit sales last month, the company has retained fourth position in the country's passenger vehicle segment, it added.