Audi unveils A8 facelift with a fresh grille and updated lights

The front grille and new light design give the flagship Audi sedan a sharp fascia and more premium feel.

Audi has unveiled its updated A8 flagship sedan. The German luxury car marque has updated the A8 sedan with a fresh and bigger grille along with new LED matrix lights. The car is scheduled to go on sale from December in the international market. Pricing in Germany will start from 99,500 euros.

Also, Audi is offering an optional S Line exterior package for the A8 sedan for the first time since its inception in 1994. The S Line sports package promises to bring some sporty design cues derived from the performance-focused S8.

Speaking about the design of Audi's quintessential full-size flagship sedan, currently in its fourth generation has received a host of changes at exterior along with an array of technologies. The first thing that comes to notice is the single-frame grille that has become bigger and comes with fresh styling. It gets more chrome embellishment.

The front bumper's side air intakes come with a more upright layout. The headlamps look sharper in their revamped avatar. The redesigned adaptive LED headlamps are claimed to have received nearly 1.3 million micromirrors for digital matrix function.

The side profile of the sedan gets a masculine appearance with its subtle flared wheel arches, shoulder line and diamond-cut alloy wheels. Moving to the back, the LED strip running the entire width of the car and connecting the OLED taillights, enhances the 2022 Audi A8's visual appeal.

The car will be available in four new metallic paint options - District Green, Firmament Blue, Manhattan Gray, and Ultra Blue along with five matte shades Daytona Gray, Floret Silver, District Green, Terra Gray, and Glacier White). The car comes with chrome and black exterior packages that have been carried over. 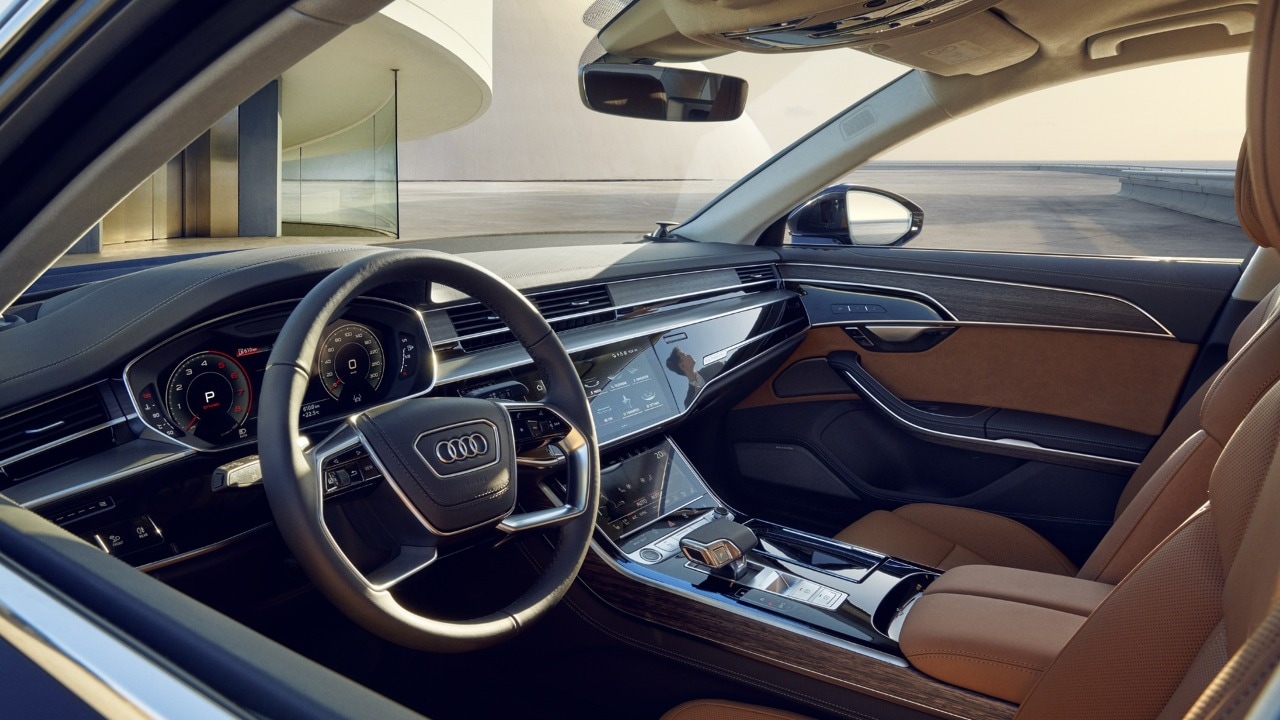 Audi A8 facelift has received a few subtle changes inside the cabin.

The Mercedes-Benz S-Class and BMW 7 Series rivalling Audi sedan has received some changes inside its cabin as well. If the pre-facelift version's cabin was already top-notch, Audi has taken the appeal one step up. The subtle changes made inside the posh cabin include an optional heads-up display along with the updated Audi Virtual Cockpit. Also, it gets a pair of touchscreens measuring 10.1-inch and 8.6-inch sitting at the centre console. The rear occupants get a personalised 10.1-inch display comprising entertainment system.

China being a key market for the Audi A8, the Audi A8L Horch comes as an ultra-luxurious variant of the sedan. It gets a V6 engine powering the car. In the other markets, the A8 and A8L will be available with 3.0-litre TFSI and 4.0-litre TFSI engine options. There will be a diesel and a plug-in hybrid variant as well carried over from the pre-facelift version. An eight-speed tiptronic gearbox clubbed with Quattro AWD system will be onboard the car.