Anand Mahindra, Group Chairman of the Mahindra Group, reacted to a video of a Bolero SUV wading through flooded streets in Rajkot, Gujarat.
By : HT Auto Desk
| Written By : Sabyasachi Dasgupta
| Updated on: 14 Sep 2021, 10:10 AM 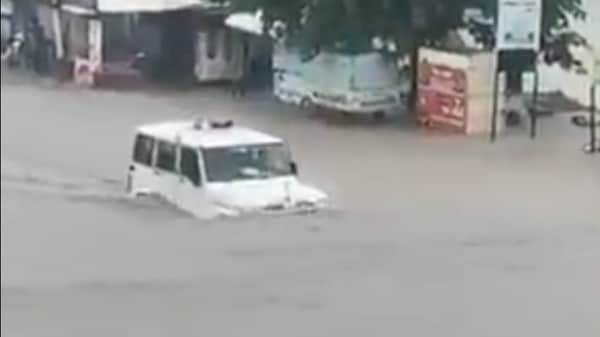 Mahindra Bolero SUV, known for its tough attitude when it comes to bad roads, has once again shown its capabilities in a video shared on social media platform. The SUV, wading through water as high as the bonnet, has left even the Mahindra Group Chairman Anand Mahindra impressed.

The video shows a Mahindra Bolero SUV wading through flooded streets in Rajkot, Gujarat. The white Bolero appeared to be easing through the water where no other cars are seen on the road.

Anand Mahindra reacted to the video, saying that the Bolero's capability has left even him quite impressed. He wrote on Twitter, “Seriously? During the recent rains? Even I am pretty amazed."

Bolero has been one of the consistent performers for Mahindra over the years, and has been its best-selling model for quite some time. Even when trends suggest people looking for more features in their SUVs, Bolero remains a firm favourite among many, especially in smaller cities and towns across India.

Mahindra has recently launched the Bolero Neo SUV, which is basically a facelift version of the TUV300, and claims to offer the same trusty drive capability that Bolero is known for. However, Bolero Neo is certainly not going to be the new-age Bolero, as the carmaker plans to revamp the SUV and bring in a new generation model in the next couple of years.

Mahindra Bolero is powered by a 1.5-litre BS 6 compliant mHawk75 diesel engine, mated to a five-speed manual gearbox. It can generate maximum power of 75 bhp and 210 Nm of peak torque. Though the SUV does not come with a dedicated off-road mode, it is still quite a capable vehicle to tackle bad roads with relative ease, thanks to its rear-wheel drive setup.

Seriously? During the recent rains? Even I am pretty amazed. https://t.co/Co5nve9uwd