Ambassador painted with artwork gets court nod for registration

The multicolour Ambassador Grand Harit-C-1800, belongs to a high court lawyer, Ranjit Malhotra, who had bought it from a counsellor of the European Union posted at Delhi in July 2019.
By : HT Auto Desk
| Updated on: 16 Jul 2020, 10:37 AM 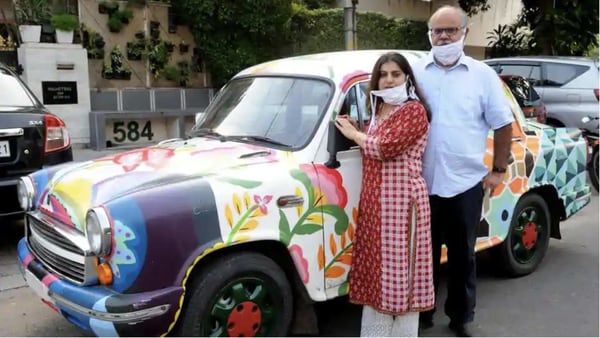 The Punjab and Haryana High Court has directed Chandigarh administration to register an Ambassador car painted with artwork after the transport department had declined to do so.

The court's direction came on Tuesday on a petition filed by Ranjit Malhotra, the car's owner.

"The reason for denying registration merely on the ground that there is artwork done on the body of the vehicle, where the base remains white, defies logic. Any reasonable person can easily make out that a white car had some artwork done upon it. Like a canvas with a spray of flowers. The base colour of the canvas would remain as it is. The Inspector has acted in an arbitrary and wholly whimsical manner, causing undue harassment to the petitioner," Justice Jaishree Thakur said in the verdict.

The multicolour Ambassador Grand Harit-C-1800, belongs to a high court lawyer, Ranjit Malhotra, who had bought it from a counsellor of the European Union posted at Delhi in July 2019.

He received the 2009 model Bharat Stage- III car in August, upon which he obtained a no-objection certificate from the registering authorities at Delhi and completed other formalities. But the Chandigarh authority refused to register it.

The reason for purchasing the vehicle from Delhi was the art work done on the car’s body by a renowned Mexican artist, Senkoe, Malhotra had told court in his petition filed after the registration was denied. He also cited a vehicle being used by JW Marriot Hotel in Delhi, which has the face of painter Salvador Dali spray painted on it. Such cars are plying in Delhi without any hindrance, he had told court.

"Our family values the ambassador and this car was delivered to me last year from my friend who was then posted as a councillor at EU office of Delhi. Delhi authorities issued the no-objection certificate but Chandigarh administration did not register the vehicle due to car's colour which was converted from white to multicolour. So we had to go to the court and now court ruled in our favour." he was quoted by news agency ANI.

The administration had argued that during inspection it was found that the colour of the original vehicle had been changed from white to multicolour. No vehicle can be altered so as to change the original specification made by the manufacturer, which in the instant case would be the colour of the vehicle, the UT had told court.

The bench observed that the car had not been subjected to any alteration as would change its basic structure, nor has there had been a change in any of its basic features. “No doubt the art work done upon it is colourful, but has it changed the basic structure of the car or has the vehicle been altered in any manner which is not permitted by virtue of Section 52 of the Act? The answer is in the negative," the bench said. Section 52 of the Motor Vehicles Act 1988 bars any kind of “alteration" in the car.