The interior of the Volkswagen Tiguan facelift SUV revealed, may carry similar features in the India-spec model too.

2022 Volkswagen Tiguan facelift SUV broke cover in United States on Wednesday. The SUV, which is the German carmaker’s best-seller both in US and global markets, will soon be launched in India too.

The Tiguan facelift showcased more than a month ago by Volkswagen at an event bears a lot of resemblance with the one that has been unveiled for the US market. What Volkswagen did not reveal for the Indian journalists was the interior of the 2022 Tiguan facelift.

Volkswagen in US has revealed the interior details of the facelift SUV. A lot of these features are likely to make way into the Indian-spec Tiguan SUV too. The Tiguan facelift will come with several updated technology inside the cabin. It will have a digital cockpit instrument cluster as expected. An 8-inch display will come as standard feature while there is an option to upgrade it to the 10-inch Digital Cockpit Pro as well. 2022 Tiguan facelift will also get the MIB3 infotainment as standard.

The interface for climate control will now be touch-enabled. For comfort, the 2022 Tiguan SUV will be offered with leatherette or leather seating surfaces, power driver and passenger seats, panoramic sunroof, Fender music system and 15-colour ambient lighting. 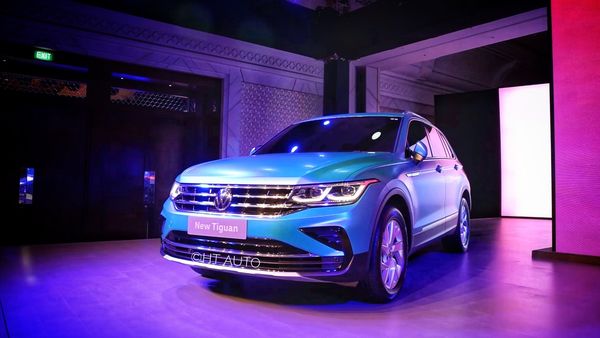 Volkswagen Tiguan facelift SUV that was unveiled for the Indian market.

For the India-spec model, Volkswagen had said the new Tiguan will come with a digital cockpit, similar to the Taigun and T-Roc SUVs. Volkswagen had also confirmed that the Tiguan for India will also get premium Vienna leather seats, illuminated scuff plates, Panoramic sunroof, 30 shades of ambient lights and much more.

The facelift version of Volkswagen Tiguan was unveiled in India back in March. Launched first in 2017, the design of the facelift Tiguan SUV has undergone several changes. Besides the new brand logo, there are four chrome lines running across the length of the grille on the facelift model. It looks slightly different from the one that was unveiled in US. The India-spec Tiguan will also have the IQ. Light technology. This will help customise the headlights in different modes for different situations.