Honda Cars India will drive in the hybrid version of its flagship City sedan in India next month. The launch is expected to happen later.
By : HT Auto Desk
| Updated on: 29 Mar 2022, 06:21 PM 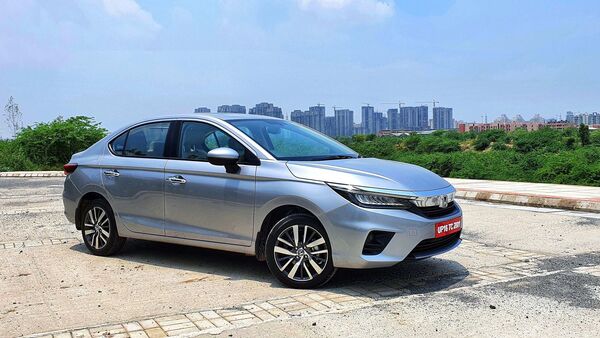 Honda Cars India is all set to drive in the hybrid version of its flagship sedan City next month. The Japanese carmaker has announced that the 2022 Honda City Hybrid will be officially unveiled on April 14. This will be the first major launch from Honda this year. It currently offers the City with petrol and diesel variants.

The launch of the Honda City Hybrid was earlier slated to take place in February this year. However, due to the Covid-19 pandemic and related complications, the launch had been deferred. While the unveiling will take place next month, the City Hybrid is expected to be launched in May.

The upcoming City Hybrid features Honda’s i-MMD hybrid technology that pairs an internal combustion engine and two electric motors. The engine is an 1.5-litre, four-cylinder, naturally aspirated Atkinson Cycle petrol engine which has been rated to deliver 98hp, 127Nm. This engine works in conjunction with an electric motor acting as an integrated starter-generator (ISG). In addition, there is also a secondary motor which is responsible for belting out 109hp of power and 253Nm of torque. This motor powers up the front wheels via a bespoke gearbox with a single, fixed-gear ratio.

As seen internationally, the upcoming City Hybrid car may also be offered with Honda Sensing technology in India. This is essentially the company's suite of active safety features such as lane departure warning, adaptive cruise control, lane keeping assist, auto high beam assist, emergency braking and front collision warning system. Needless to say, this car will be first from Honda India to come with such an extensive safety suite.

Needless to say, the City Hybrid will come out as a costlier offering demanding a premium over the standard model. The launch is expected to take place in the weeks to follow its introduction in India.