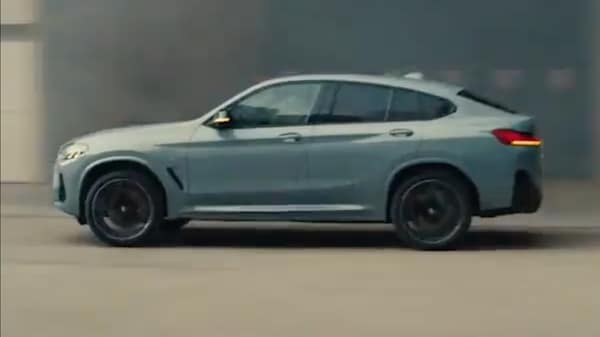 2022 BMW X4 facelift SUV will be launched in India today. The German carmaker announced the date of the official launch through its social media handled on Tuesday. BMW India had earlier opened the pre-launch bookings for the 2022 X4 SUV, which will be manufactured locally at the carmaker's India facility, at a token amount of ₹50,000. Customers can book the facelift version of the X4 SUV through the company's official dealerships.

Taking to Twitter, BMW shared a teaser of how the 2022 X4 facelift SUV will look like. BMW India terms the new X4 as an SUV with ‘a bold presence that redefines every norm’. The X4 in its new avatar has already been introduced in global markets. Expect the 2022 BMW X4 to retain most of the characteristics for the India launch too.

2022 BMW X4 facelift SUV will be the German carmaker's second major launch this year after it drove in the 2022 X3 facelift SUV earlier.

2022 BMW X4 facelift SUV will have a range of upgrades, which include redesigned exterior features. The cabin of the SUV will also undergo certain changes like a new and improved infotainment system.

Among the key changes on the outside, the new X4 SUV will come with a redesigned BMW kidney grille, sleeker new LED headlights with Matrix function and LED taillights among others.

The interior of the 2022 X4 will have a reworked dashboard which will house a 10.25-inch fully-digital instrument console and a 12.3-inch touchscreen infotainment system. The cabin will also offer other features like a three-zone climate control, a tweaked centre console, and new controls for the gear lever selector. The SUV will also come with engine start-stop button and electric parking brake as well.

Under the hood, BMW is likely to use both the 2.0-litre turbocharged petrol and 3.0-litre six-cylinder diesel engines. The petrol unit is capable of churning out maximum output of 248 bhp and 350 Nm of peak torque. The diesel unit can generate 282 bhp of maximum power and 650 Nm of peak torque. Both engines come mated to a standard eight-speed automatic transmission. BMW may also include a 2.0-litre four-cylinder unit which can generate maximum power of 190 bhp.

The outgoing X4 model is currently priced at ₹67.50 lakh (ex-showroom). The 2022 X4 facelift SUV price is expected to start around ₹70 lakh (ex-showroom) when launched. It will take on rivals such as Mercedes-Benz GLC Coupe in India.