Aston Martin has shared yet another teaser revealing the grille of the 2022 DBX SUV. The new generation Aston Martin DBX will rival the likes of Lamborghini Urus when launched.
By : HT Auto Desk
| Updated on: 31 Jan 2022, 03:54 PM 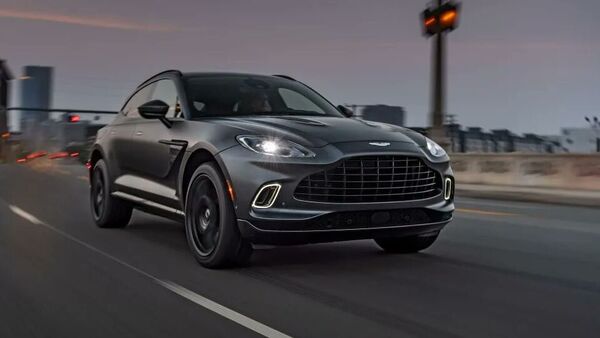 Aston Martin is all set to take the covers off the new generation DBX SUV tomorrow, February 1. In its latest teaser, Aston Martin has revealed some more details about the 2022 DBX, claimed to be the ‘world’s most powerful luxury SUV'.

According to the teaser video, shared by Aston Martin on its social media handles, has confirmed certain changes that the new generation DBX will undergo. Among them are the redesigned front grille and a new set of daytime running lights which have been slightly repositioned too. Beside these changes, the 2022 Aston Martin DBX SUV will also get new wheel designs and a revised colour scheme.

The key change in the new DBX will be under its hood. It will now come equipped with a new turbocharged V12 engine developed by Aston Martin. The engine is capable of churning out maximum power of 650 hp. It will be over 100 hp more powerful than the previous generation model which used to be powered by the 4-litre twin-turbo V8 engine sourced from Mercedes-AMG. The V8 engine can generate 542 hp of maximum power and 700 Nm of peak torque. The DBX model currently on sale takes all of 4.5 seconds to hit 100 kmph from standstill and comes with a top speed of 290 kmph.

The world’s most
powerful luxury SUV.

Aston Martin has billed the upcoming 2022 DBX SUV, which may be called the DBX S, as the ‘world’s most powerful serial luxury SUV'. When launched, it will threaten the supremacy of Lamborghini Urus and Porsche Cayenne Turbo GT as some of the most powerful SUVs in the world.

The DBX has been the British luxury carmaker's best-selling model for the past couple of years. The SUV was launched late in 2020, but managed to generate a lot of interest in a short span of time. Between January and September last year, Aston Martin delivered as many as 2,186 units of DBX SUV to customers worldwide.