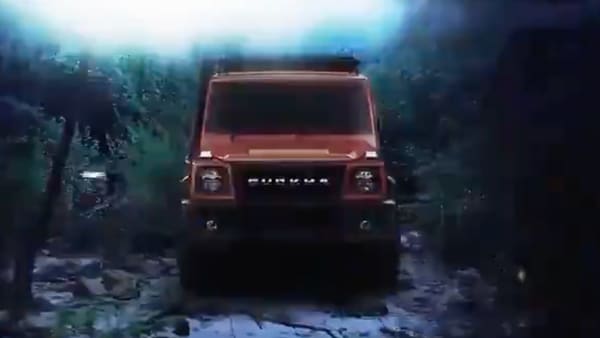 2021 Force Gurkha, rival to Mahindra Thar SUV, is all set to officially break cover this week. Ahead of the unveiling, most of the details about the 2021 Gurkha is now revealed, including its design, features and looks.

In the latest teaser shared by Force Motor, there is a clearer look at the production-spec Gurkha SUV's front face. It remains more or less true to the pre-production version showcased at the Auto Expo last year.

Besides the snorkel placed on the driver's side of the new Gurkha, the SUV also gets a redesigned bonnet with new shark gill vents. These changes have been made to make the 2021 Gurkha SUV a more capable water-wading vehicle.

Force Gurkha is also likely to get redesigned taillights, new set of wheels, a tailgate-mounted spare wheel and a functional roof carrier too.

Force Motor has also revealed key features of the interior, which is likely to get an all-black colour theme. It gets moulded floor mats to ensure low NVH in the cabin, a semi-digital instrument cluster with dials to indicate speed and rpm, a digital infotainment screen and much more.

The four-seater version of the 2021 Force Gurkha will come with captain seats at the rear. It will also have armrests for both rear passengers. The seats will have Gurkha badging too. The large side windows, which appear sealed just like Mahindra Thar, are also likely to help enhance visibility for occupants.

2021 Force Gurkha SUV is likely to be powered by a 2.6-litre diesel engine, that is capable of generating maximum power of 89 bhp and 260 Nm of peak torque. The engine will come mated to a 5-speed gearbox with a separate gear lever for the 4X4 mode.

It's time to reconnect with the outdoors in The All-New Gurkha. Tell us how excited you are, to set out for a real adventure?
3 days to go!
.
.
.#TheallnewGurkha #ForceGurkha #Comingsoon #StayTuned #GetReady #Gurkha4x4x4 pic.twitter.com/5lWLUPKC9h

For now, the 2021 Force Gurkha will only have Mahindra Thar SUV as its rival in the Indian market. The price of the new Gurkha is likely to range between ₹10 lakh and ₹12 lakh (ex-showroom).