A large storage area has replaced the second row of seats that expands till the back of the vehicle, providing 1000 litres of space to carry cargo.
By : Sabyasachi Dasgupta
| Updated on: 12 Jun 2020, 09:49 AM 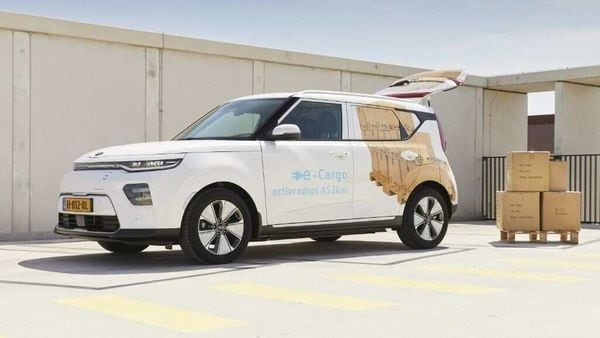 With the special cargo conversion kit, any e-Soul can be converted into a delivery van.

The 2020 Urban Car of the Year award winner Kia Soul EV has become the new alternative when it comes to commercial vehicles. The electric crossover was revealed as a cargo vehicle for Europe. With the special cargo conversion kit, any e-Soul can be converted into a delivery van.

The electric version of the Soul began to be marketed in 2014 with its home country South Korea as its manufacturing centre. The last generation of vehicle was released in Europe at the beginning of last year with a range of 452 kilometres.

For this part, the e-Soul Cargo enters the offer and the tendency to adapt utility models with much greater storage capacities.

The cargo variant of the Kia Soul EV retains its exterior appearance, with the exception of subtle details such as the new paneled rear windows, and a simpler design of the fog lights on its front and the black outline of its rear part.

The interior changes with the absence of second row of seats. Instead, a large storage space expands till the boot space of the vehicle now, providing space to carry cargo. There are points to secure the load and a grid to separate the area from the front of the vehicle. The commercial variant Kia Soul EV can hold 1000 litres of cargo, enough for a model of this size.

(Also read: Kia Sorento wins yet another award, this time for its design) Inside, a large storage space replaces the second row of seats that expands till the boot space of the vehicle.

The cargo variant of the Kia Soul EV is powered by a 204 horsepower electric motor and a 64 kWh battery. It can run for 452 kilometres between recharges and can be recharged through a fast charging system of 20 to 80% in 40 minutes.

By the end of 2025, Kia plans to introduce 11 new electric vehicles. The first model based on an entirely new EV platform will be launched in 2021. Kia is also working on roadmaps for future mobility concepts, for example with autonomous driving Purpose Built Vehicles for both passenger and freight transport.