ZS EV 2022 from MG Motor India is promising a better range per charge courtesy a bigger battery. But while driving longer is the true test for an electric car, driving in style is what ZS EV is also promising to offer.
By : Shubhodeep Chakravarty
| Updated on: 31 Mar 2022, 11:20 AM

The latest ZS EV gets a number of clever design updates to give it a more modern visual appeal. Do not miss the reworked front bumper.

MG Motor took an enormously bold decision back in the very first month of 2020 when it officially launched the ZS Electric Vehicle (EV) here as its second product. Hector, MG's first product, managed to establish a firm foothold for the company but here was a car that was more than just a car, it was a show of intent that MG is also about assisting in the creation of an entire ecosystem for new-age, zero emission vehicles. At the time, there was only one EV of note that it locked horns with - Hyundai Kona. But in the little over two years since, the ZS EV has managed to find a noticeable number of owners despite its rather hefty price point. And now, the MG ZS EV has been given a slew of updates which are aimed at furthering the appeal of this battery-powered vehicle.

The ZS EV was never about garnering massive numbers for MG in the country. The electric car segment remains in its nascent stage today as it was back in the early parts of 2020. At well over ₹20 lakh for each of the two variants, the ZS EV - or even the Kona for that matter, isn't for mass appeal as much as it is for the conscious buyer who can afford a second car in the garage. But times are changing. Slowly but surely. The ZS EV registered a year-on-year growth of 145% with a total of 2,798 units being sold in all of 2021.

It is a small number. It is also a significant number. And it is a number that MG Motor India would now like to build on. Just how will the latest ZS EV help bring more people to the electric fold of the British brand?

The MG ZS EV was a smart-looking crossover SUV right from the start. And now, it is a smarter-looking EV with its updated front grille that comes integrated to the front face. The entire front fascia is in body colour and has closed panels apart from the charging inlet point. This point was previously under the MG logo but has now moved to its right. Opening it for charge or shutting it once done, however, remains as convenient as ever. The LED projector head light units on either side also look sharper now, complete with a sleek design update on the LED DRLs. The latest ZS EV now stands on 17-inch wheels with the alloys receiving a design update while there is additional body cladding on either sides. The rear profile benefits from a reworked LED tail light unit and while the overall design language is near identical to the Astor - after all, it is the petrol twin of this EV, the ZS continues to show off its own unique elements on closer look. It is also available in five colour options - White, Black Pearl, Blue, Silver and Red. 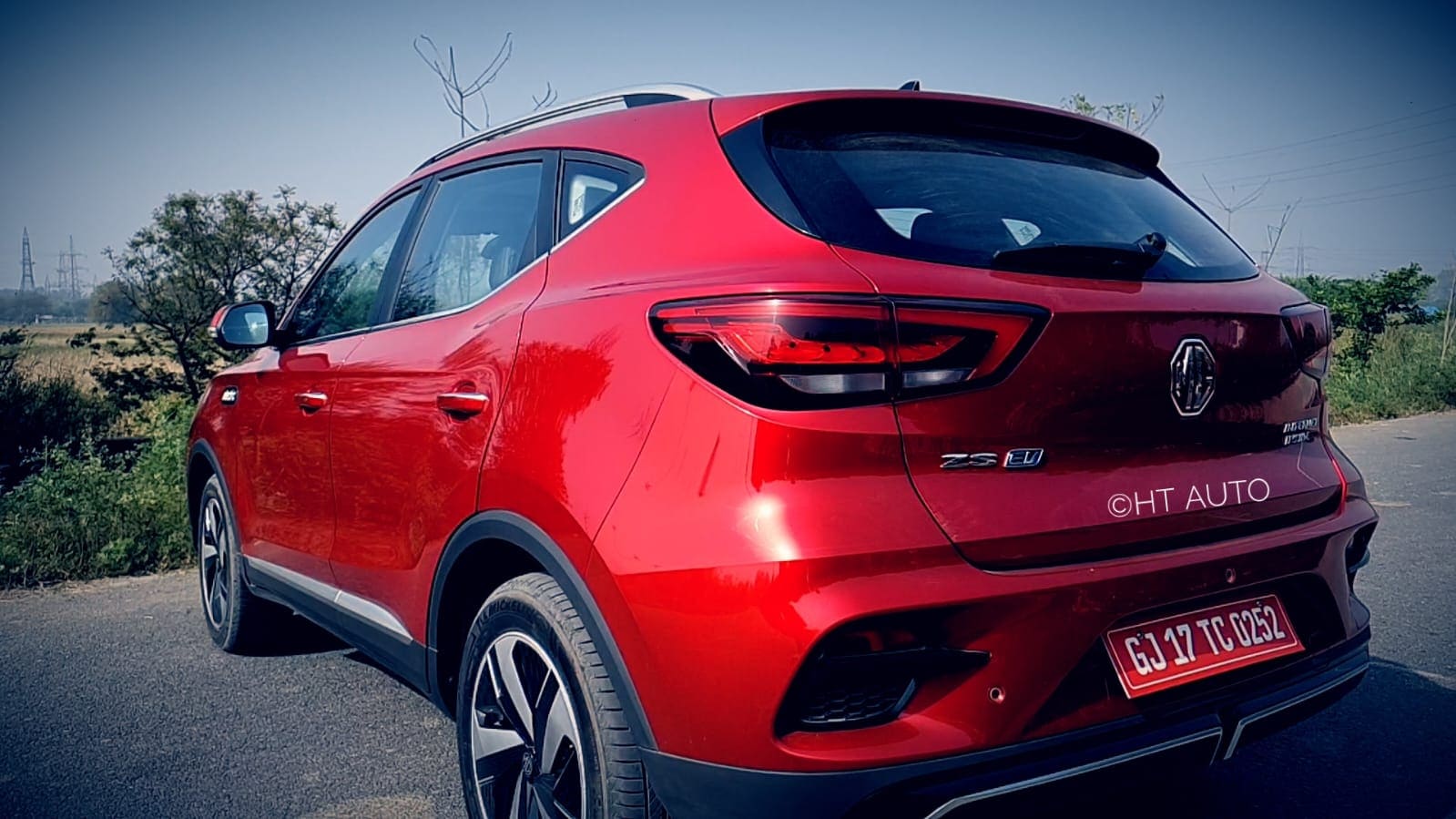 MG has made serious attempts to take the feature list as well as quality of the ZS EV cabin closer to that of the Astor. Now not that the previous ZS EV lacked in terms of space or premium quality but the 2022 model raised the bar a bit higher still. 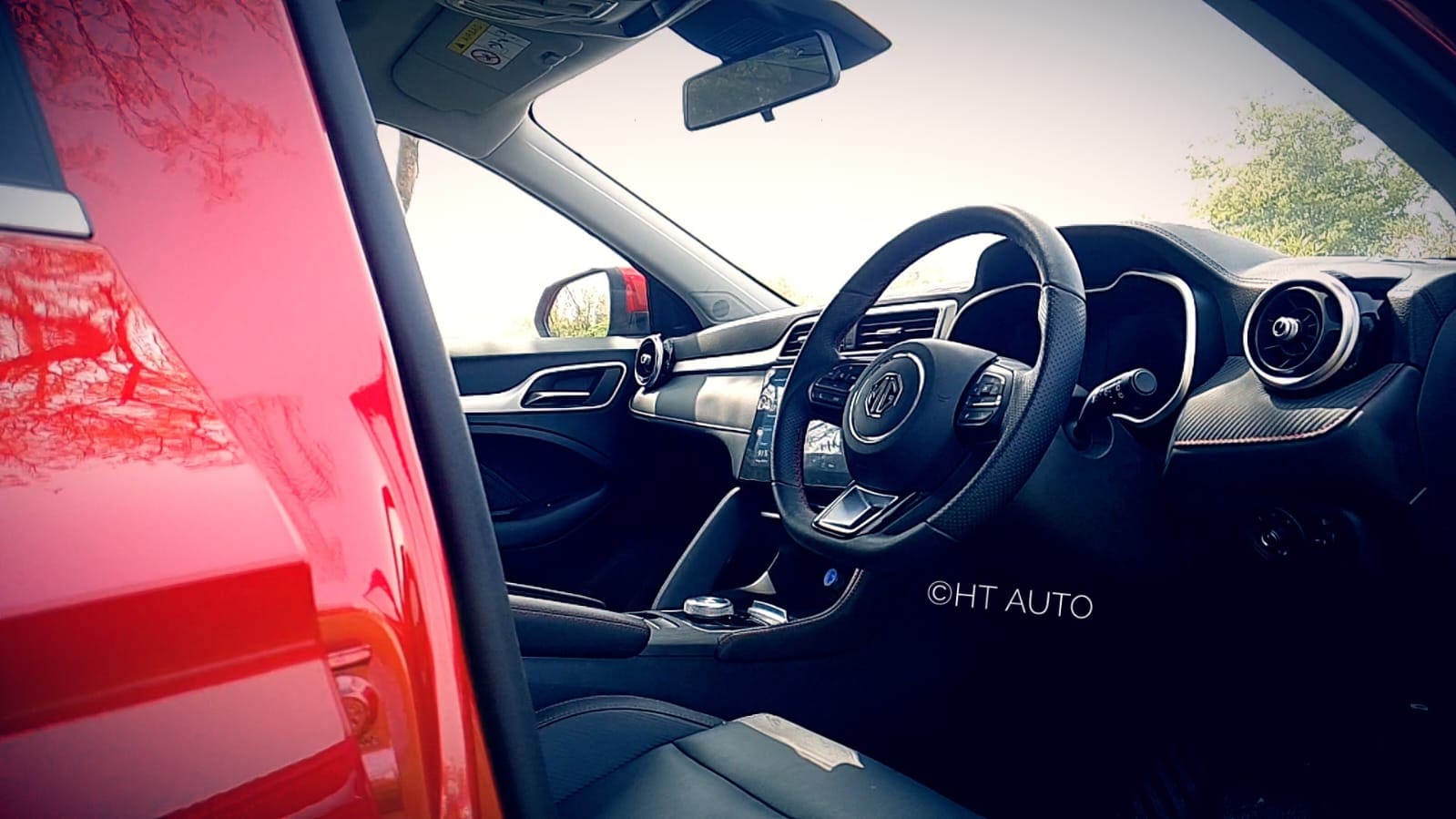 The layout and quality of materials around the new ZS EV remains top notch.

There is a new faux carbon-fibre trim around the dashboard and climate control buttons which have been updated to make these appear like the ones inside the Astor. For passengers at the back, there is an armrest with cup holders as well. In terms of space, there is no change which means that rear-seat passengers will continue to have adequate leg space and knee room even if three adults abreast may be a squeeze. Thank heavens though for the rear AC vents. 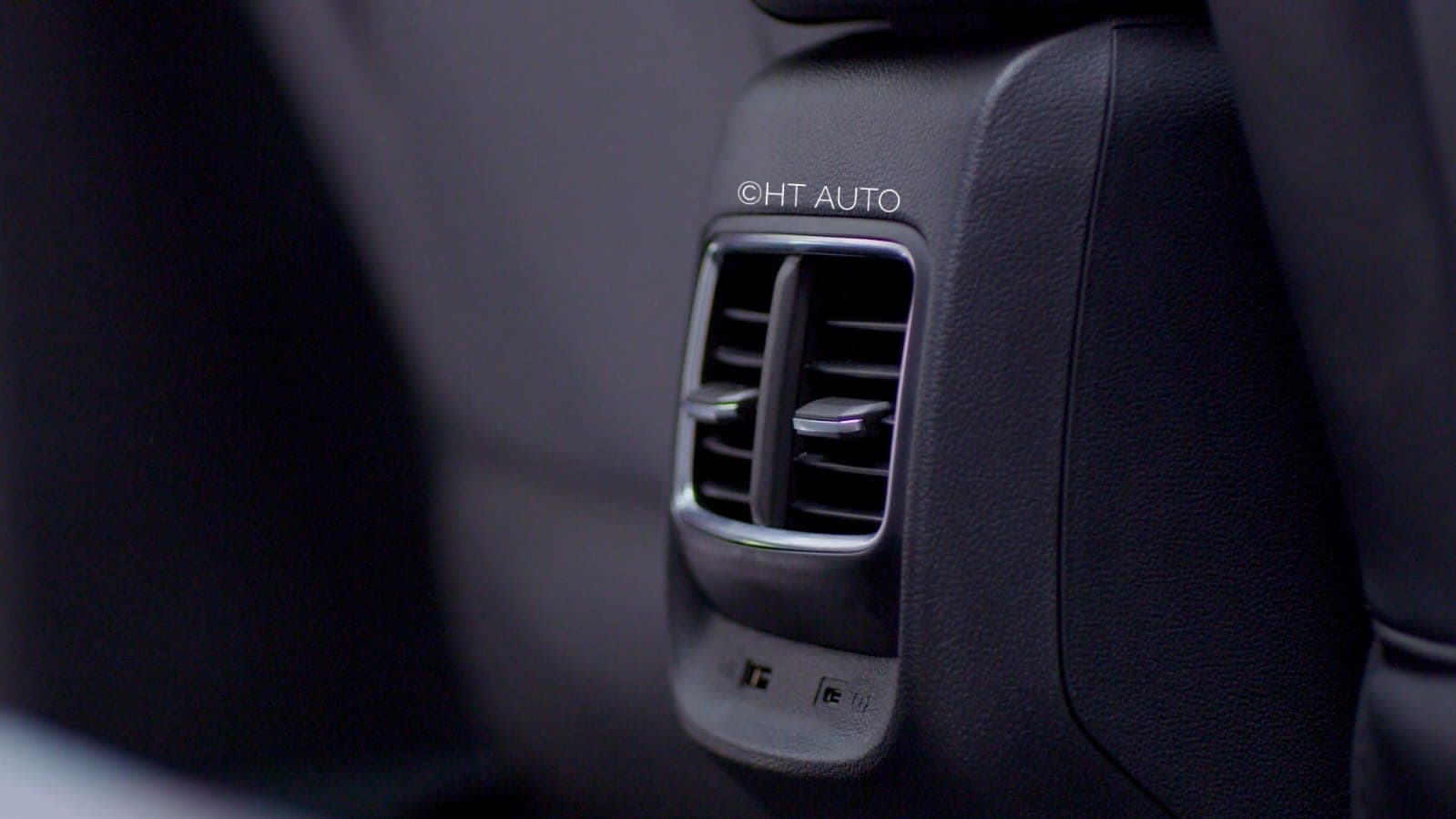 There are plenty of USB charging points all around the ZS EV. This shows the points just under the rear AC vents.

But the biggest change of note is the addition of a larger 10.1-inch main infotainment screen that replaces the eight-inch screen on the preceeding model. Being an MG, the screen is quite fun to use even if there still is a bit of a learning curve to fully master all that it offers - navigation, music controls, EV status, apps and a lot more. The screen itself is bright enough to cut glare, is also typically responsive to touch, but still attracts fingerprints which makes it look shabby when it is turned off. No such issue with the seven-inch all-digital driver display which neatly puts out all drive-related information including those specific to an electric car like charge and regen levels. 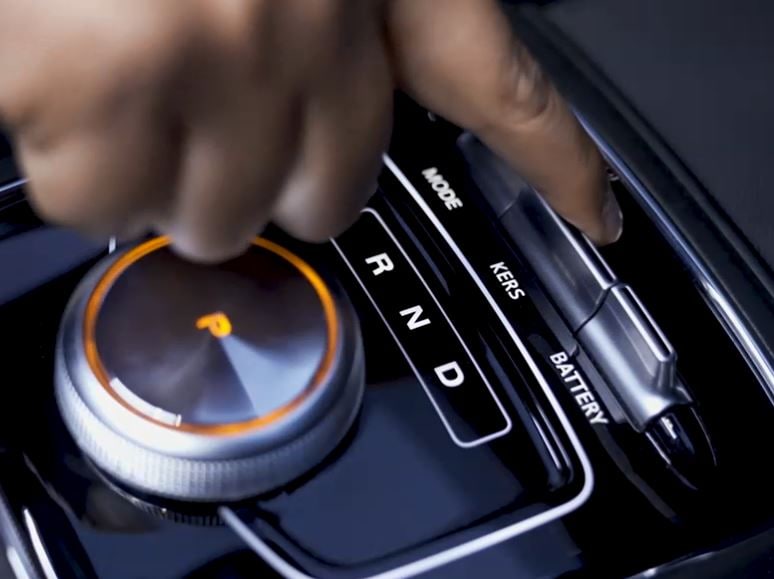 The buttons to select drive modes or adjust KERS is easily within reach of the driver in the latest ZS EV from MG Motor India.

The other highlights in the cabin include a panoramic sunroof that can be opened and closed via voice command - voice commands can also be used for various other functionalities like navigation, operating the driver window, controlling the air-conditioning levels to name a few. Wireless phone charging and a 360-degree camera, blind-spot monitor and rear cross traffic alert also make way into the new ZS EV model. 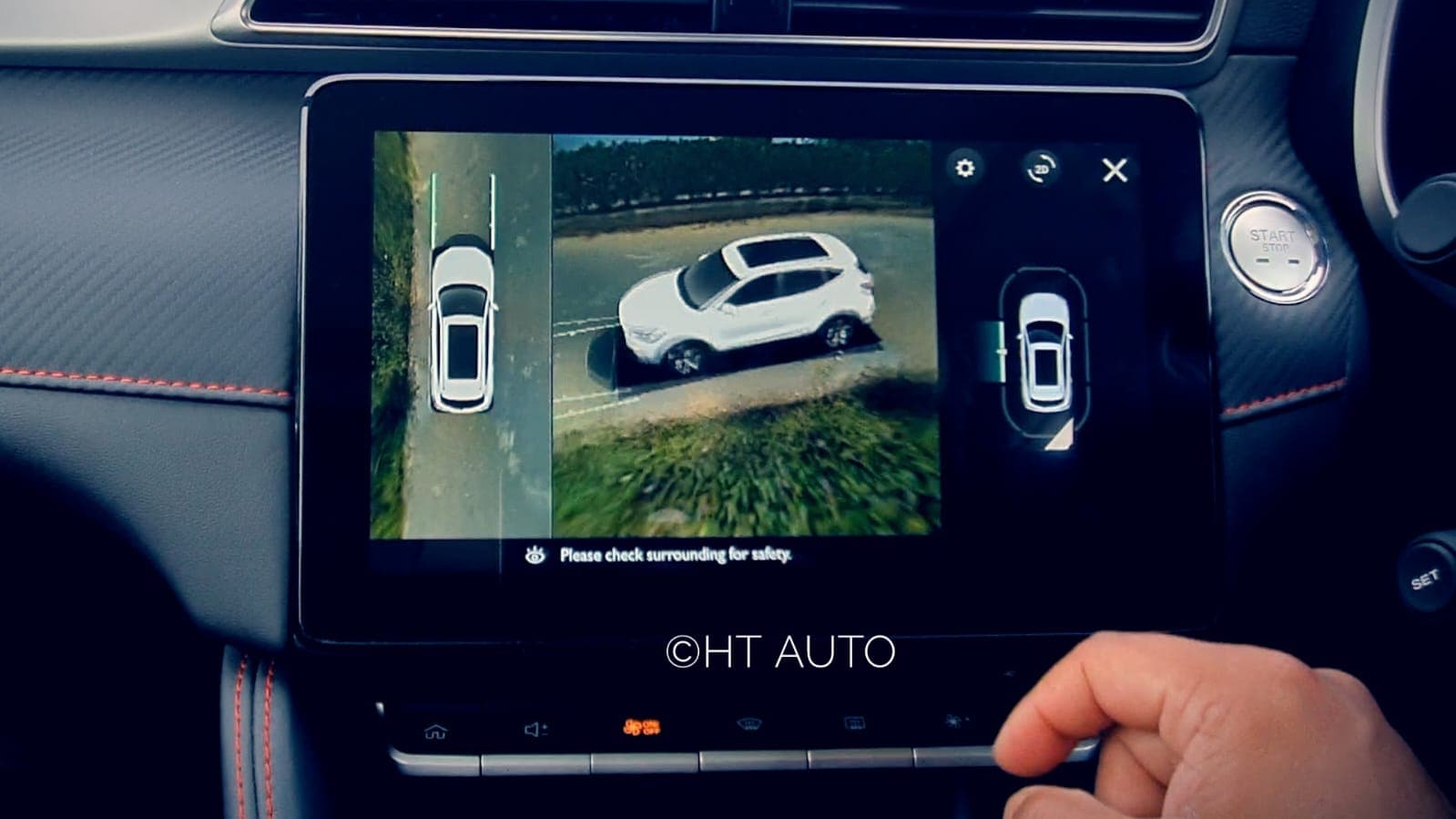 ZS EV, the charge and range:

The latest ZS EV has a 50.3kWh battery pack that replaces the 44.5kWh battery pack in the preceding model. MG claims that this helps the 2022 ZS EV offer a per-charge drive range of up to 461 kms as certified by ICAT. Quite obviously, the real-world range will differ because this figure is heavily influenced by factors such as climate, vehicle load, terrain, drive style and others. 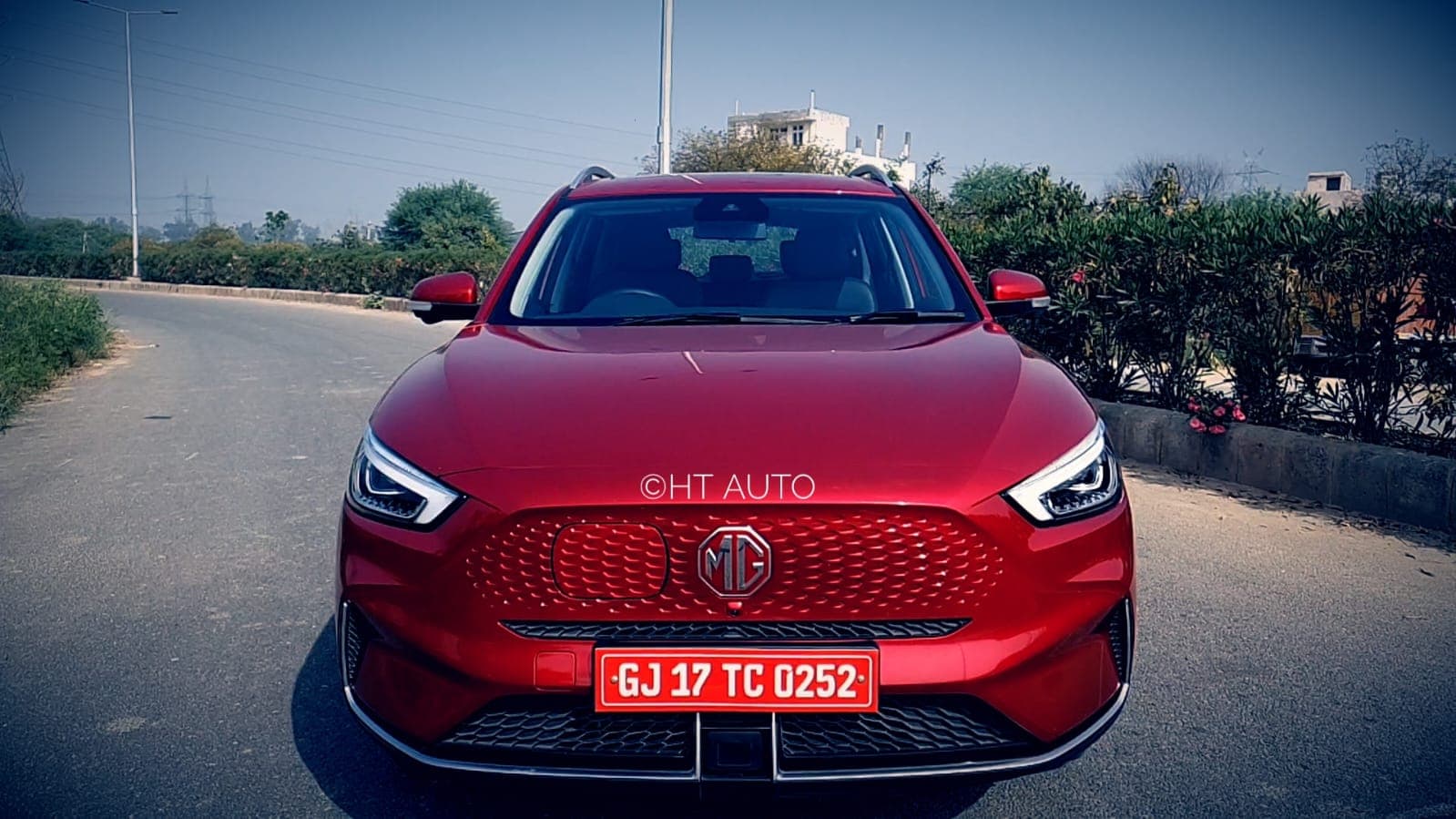 The charging inlet has now been placed adjacent to the MG logo on the 2022 ZS EV.

For our particular test unit, the range indicated was at 305 kms at 100% battery left with the unit having previously done around 1200 kms. At around 93 per cent remaining charge, this particular test unit of the ZS EV showed a range of 283 kms. These figures do depend on a wide variety of factors.

There are, of course, plenty of ways to enhance the range to last the distance. We, for starters, engaged the ECO mode, turned the AC to minimum and kept this EV running at around 80 kmph in city traffic. For around an hour, the dip in range left was on expected lines. The customizable KERS (Kinetic Energy Recovery System) was also kept on max level which meant strong braking each time the foot was off the throttle. But while this was perfect for city driving, it would have been great to actually see the benefits of these measures in terms of range gained, on the screen.

While this electric vehicle continues to have an eager flair even in ECO mode, switch to the Normal or Sport mode and the electric power comes to life in its true form. The power output has gone up to 176 hp even if torque has seen a minor dip to 280 Nm. But in the real world and out on open roads, the ZS EV remains every bit as sporty as it always was. Minor throttle inputs provide an eager boost, palpable in ECO but amply evident in Sport.

The EV also continues to benefit from a steady drive nature, regardless of speeds and across most road conditions. Amply aided by a decently weighted steering and a well-tuned suspension, the MG electric car is more than likely to offer a pleasant city commute while also faring well on the occasionally short highway journeys.

The ZS EV was a step in the clean direction into the future back in early 2020. In a world that has changed dramatically in the past two years - in ways more than one, the need for a sustainable future is more pressing than ever before. In that sense, the 2022 ZS EV is a march down the same road and continues to back its core strengths - performance, features, quality cabin and of course, a longer range for a cleaner drive.

At ₹22 lakh for the Excite and ₹25.88 lakh for the Exclusive trim (ex showroom prices), the ZS EV is quite a pricey proposition and this alone remains its Achilles heel. But if you can afford one, and aren't much concerned with money buying you a mammoth road presence, this EV slots itself right in and can be a solid addition to your garage which, chances are, already has at least one other petrol or diesel-powered car.