Honda City eHEV brings a whole set of hybrid drive traits while also offering cutting-edge drive-assist features. There's, however, not much change on the outside or in the cabin for those looking at instant bragging rights. Check out the first-drive review of City eHEV.
By : Shubhodeep Chakravarty
| Updated on: 04 May 2022, 12:23 PM 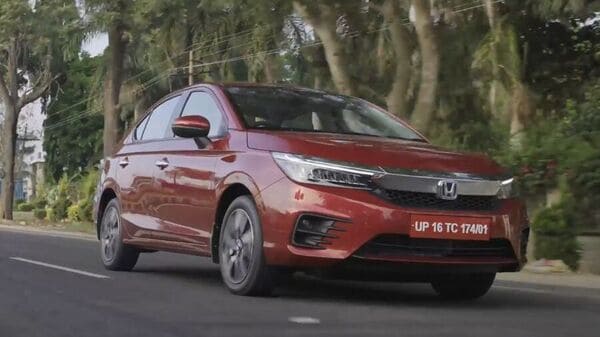 The Honda eHEV is scheduled for an official launch in May. Bookings are already open with the company claiming order books filled for several months.

It has been well established now that the global and Indian automotive industry is fast heading towards a future that is raring to snub conventional sources of fossil fuel. But it is also - and equally - well established that unconventional sources of energy for mobility will need fast and far-reaching infrastructure and a complete overhaul of how we power our vehicles today. It is all noble to speak about electric mobility ensuring zero emission but out in the real world, there's a whole lot of waiting - figuratively as well as practically. It is either a wait for that perfect electric vehicle (EV) that would satiate your driving and mobility needs, or if you already own an EV, it is a wait for a charge that could be a mighty deterrent on long drives. Hybrids then promise to be the bridge between clean(er) energy, better performance and limitless range. And when it comes to hybrid powertrain, Honda claims to have the world's best technology - eHEV. It was only natural then that it is the flagship model in Honda City here in India that would be the first off the block from the company to get the hybrid technology. 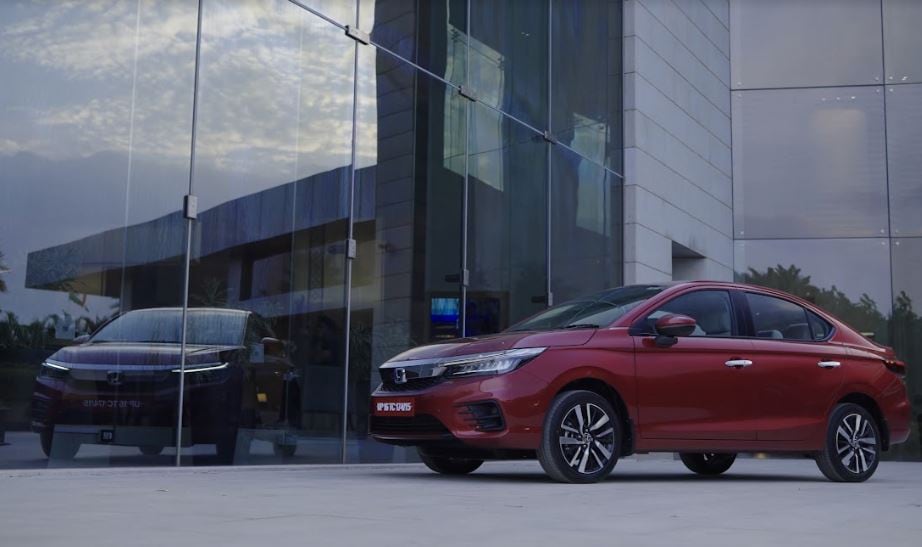 Basking in its own reflection: Honda City Hybrid eHEV is instantly recognizable as the most popular mode from the company in the country. Look closer though and it is clear it also is the newest.

Now while Honda Cars India has been rather sedate in recent times, the City is an undisputed champion of a fading segment called sedans. Sophisticated looks, spacious cabin and a decent feature list, the fifth-generation City has been a power player in its own right. But now, all set to hit the market is the Honda City eHEV, a model that is looking at creating its own niche space and an identity that is distinct from even its petrol-only and diesel-only twins.

We recently dropped down in Bengaluru to test what the City Hybrid brings to the fore. And here's our first-drive review of the all-new Honda City Hybrid eHEV.

The Honda City Hybrid gets a 1.5-litre petrol motor at its heart but its hybrid credentials are underlined by two electric motors - one assumes the role of generator while the other is responsible for propulsion. The combined power output figure stands at 124 hp as against 96 hp from the engine alone. This figure, obviously, is the same as that of the petrol-only Honda City. 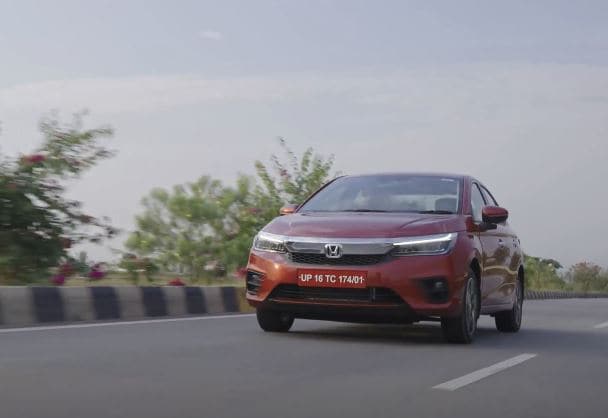 Honda City eHEV is a confident option for regular city commutes but does have a certain degree of panache on open highway stretches as well.

The eHEV technology itself involves a whole lot of complex processes which, to simplify, has an on-board system that regulates the use of the engine and the battery to propel the front wheels while ensuring two key aspects - better performance and enhanced fuel efficiency. So is the City Hybrid free from emissions? No, that would have made it perfect (also electric). Does the technology, however, come good on its two crucial aspects mentioned above?

There is clearly a very major bump up in performance credentials of the City Hybrid. Sportier and more eager, it is also deadly silent, at least at the start. This is because the City eHEV begins proceedings on electric power only, switching to a hybrid mode as the speed builds. But while low-speed cruising means the sedan moves on either electric alone or hybrid, the engine takes over entirely once around 80 kmph. And it is at high speeds that the hybrid City is reminiscent of its petrol-only alternative. There's very evident engine groan when the throttle is floored even though the single gear ratio tries its best to calm matters down. It bears fruit only once triple-digit speeds are neared, a clean momentum thereon.

Within city limits, the electric-only mode functions flawlessly in start-stop traffic conditions and the three-level regenerative braking - easily accessed through paddle shifters behind the steering - are tuned to perfection without being intrusive. In fact, weaving in and out of Bengaluru traffic, I mostly kept the regen braking at one to negate the most of the need for physically pushing the brake pedal. Do remember though that the lithium-ion battery pack inside is quite small - Honda won't share the specifics - and so, don't expect to go electric-only for far too long. 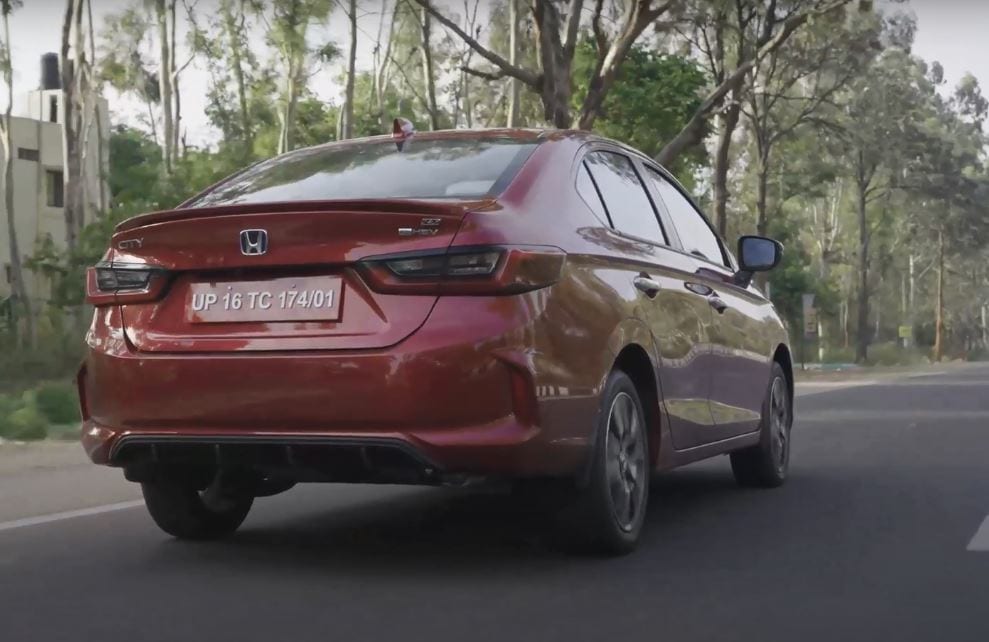 Honda City Hybrid eHEV has lower emissions than the petrol-only twin of the model.

Nonetheless, our fully packed City eHEV - four adults, packed boot and AC on full blast - still showed off a mileage of around 22 kmpl and I have no doubt in Honda's claim of 26.5 kmpl in ideal conditions. With petrol prices at the current levels, this alone could make the City Hybrid a big winner.

But while Honda City Hybrid eHEV is surely good fun on the move with the added advantage of significantly higher fuel efficiency, what is it on the inside and does it stand out - visually speaking - from the outside?

The folks at Honda weren't just going to give you a hybrid and expect you to bask in the glory of a more capable drive and better mileage. A major highlight of the City Hybrid eHEV is that it is the first model in India to get the much-acclaimed Honda SENSING - suite of safety-related technology. Basically ADAS (Advanced Driver-Assistance System), the SENSING technology depends on a wide-view camera mounted on the windshield, facing the road ahead.

Under supervision, I tested its major highlights like Lane Keep Assist, Forward Collision Warning, Road Departure Mitigation, Adaptive Cruise Control and Collision Mitigation Braking, and on each of these counts, the City Hybrid passed with flying colours.

LKA issued a visual warning on the TFT and an audio alarm each time I steered out of my lane. The FCW too worked every single time when the camera detected a potential danger stemming from the speed of my vehicle and object ahead, issuing a visual and audio warning. In case an object - car, truck, two-wheelers or even pedestrian is too close, brakes are auto applied to slow the City down to 30 kmph. While the FCW was a bit too risky to test on public roads, I particularly loved the Adaptive Cruise Control and Road Departure Mitigation systems working in tandem to allow for a calmer, safer drive. On paper, it is possible to let the two systems work the City on open stretches, Honda and I both recommend hands on steering and attention on surroundings at all times.

It is remarkable that the Honda Sensing is entirely dependent on one solitary cam and road data stored on cloud to assist drivers. No radar, no sensors.

For all the rather remarkable technology on the City Hybrid, the eHEV doesn't stand out much from its petrol-only model. On the outside, it is definitely - and slightly - sportier even if it won't be instantly evident. The Solid Wing face has been updated slightly, the claw-type garnish for the fog lamps are striking while the black diamond-cut alloys are catchy too. At the rear, there is a trunk lip spoiler and rear bumper diffuser for a clear sporty touch without going overboard. Screen closer and the 'H' logo at the front and rear is in a shade of Blue while the ‘eHEV’ lettering on the trunk lid confirms this is a hybrid. 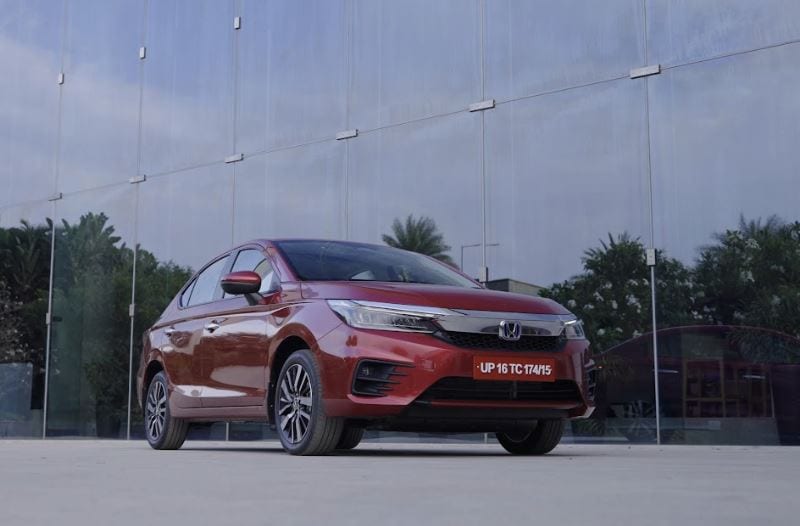 The City eHEV looks smart without outwardly trying too hard to do so.

Step in and there is a new two-tone ivory and black interior colour theme. The premium leather upholstery is top notch while the seven-inch HD TFT screen puts out all the drive-related information. The eight-inch main display has been carried forward although I had hoped it hadn't been. Not only does it look several years old, it continues to have a whole lot of glare under sunlight. That aside, features such as one-touch sunroof, ambient lighting, support for Android Auto and Apple CarPlay, charging points - all are taken ahead. 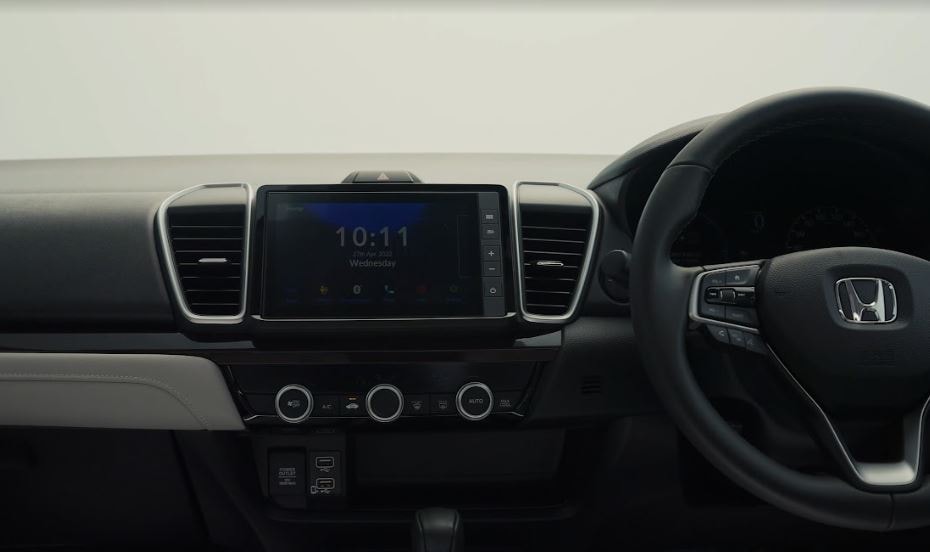 A look at the main display screen inside the Honda City Hybrid.

What is a big let down for me even if it could not really be helped perhaps is the boot space now coming down by around 200 litres to just above 300 litres. The hybrid set up eats into the space which would have otherwise been for large bags. Now, and at best, the space is good enough for one large suitcase and two carry-on bags. There is a spare wheel on the India model - global models get puncture-repair kits - and there is some nifty space next to it too but overall, the cargo area does take a hit.

The Honda City Hybrid eHEV makes absolutely great sense in the current scenario when fuel prices are at record levels and the electric mobility space is still in nascent stages. The City is a confident sedan and to bring the technology to this particular model makes perfect sense. Add to it the fact that the City eHEV is made available in only the top-of-the-line ZX variant, means you drive out a car that is well-knitted.

But at the time of writing this review, the official pricing isn't known. And therein could be the City Hybrid's biggest strength or its biggest folly. If priced at around ₹18 lakh, also because it is being locally manufactured, this particular model has the potential of taking the fight right up to the door of the newer Slavia TSI and Virtus GT Line. If priced anywhere at or above ₹20 lakh though, the Honda City Hybrid's practical sense - to be read as fuel efficiency - may make very little sense. It is now, therefore, up to Honda Cars India to decide if it wants to fight rivals with smart power or leave it to hopes of staying at the top of the mid-size sedan space.