There were reportedly two women in the car and one of them was found by cops drinking wine despite the extent of the accident that had just taken place.
By : HT Auto Desk
| Updated on: 01 Jul 2020, 10:25 AM 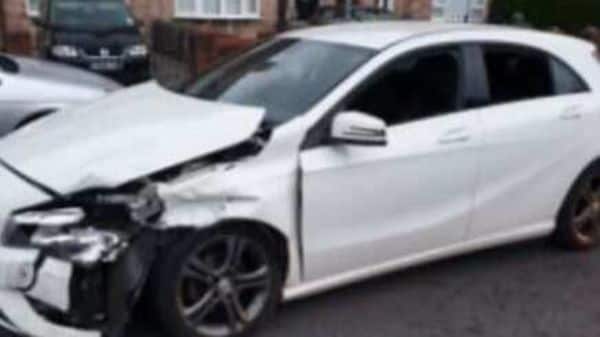 In a rather bizarre incident, a woman in UK's Merseyside crashed her Mercedes GLA into another vehicle in the wee hours of Sunday. When cops arrived at the scene of the accident, they reportedly found her trying to finish off a glass of wine she had with her.

According to UK's Daily Mail, two women were inside the white GLA when it crashed into a parked blue Ford Focus. The accident resulted in both vehicles getting extensively damaged with the Mercedes' bonnet coming off and its left bumper and tail light area disfigured. While it is not known if the two women inside the GLA suffered any injuries, one of them was seen drinking a glass of wine when police officials arrived at the scene of the accident.

Photographs of the GLA taken later also show wine bottles littering the cabin of the vehicle.

The white Mercedes they were in crashed with a parked blue Ford on Lyme Cross Rd in #Huyton.

One woman was finishing off a glass of wine in the car, as police arrived on scene... pic.twitter.com/3zyqkgLh6t

Why the two women - aged 33 and 35 - did not attempt to get out of the car and to safety after the accident may be because they were under the influence. Both were arrested. "Officers were called at around 4:15am on 28th June following reports of a road traffic collision on Lyme Cross Road, Huyton," a statement released by Merseyside Police read. "A white Mercedes car is reported to have collided with a parked Ford Focus. Two women, aged 33 and 35, both from Huyton were arrested at the scene on suspicion of unauthorised taking of a motor vehicle and drink driving."

While both women have been released, cops say the matter is under investigation.