Why Tesla is gold for retail investors in this Asian country 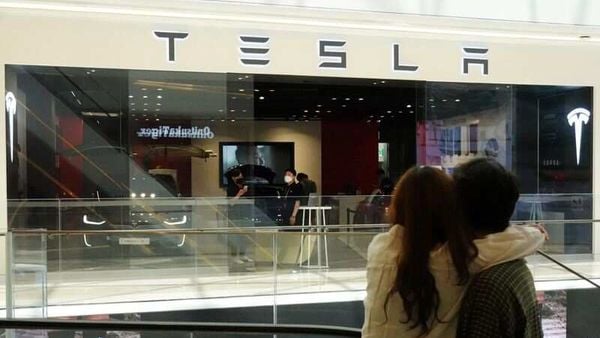 Of dreams, love and a Tesla: A couple looks at a Tesla dealership in Hanam, South Korea.

After plowing into local stocks at a record pace in the hunt for fast returns, South Korean retail investors have now become one of the largest holders in Tesla Inc.

The total amount of Korean individual investor holdings in the US electric-car maker’s stock reached $3.6 billion as of Aug. 28, according to data compiled by Korea Securities Depository. That’s equal to a stake of 0.89%, which would rank the group at No. 5 on Tesla’s list of largest shareholders, according to Bloomberg data and calculations.

Tesla has been one of the largest beneficiaries of the boom in retail investing amid this year’s pandemic lockdowns. In addition to the global brand appeal of Elon Musk’s company, the EV investing theme has particular local interest in South Korea, which is home to major battery makers including LG Chem Ltd.

Record-low interest rates at home are spurring Korean individual retail investors to seek alpha not only in the nation’s stock market but also overseas equities, said You Seung-Min, chief strategist at Samsung Securities Co. Total deposits at local brokerages for retail stock trading have climbed to a record of more than $40 billion this year, according to the Korea Financial Investment Association. Seven out of the top 10 overseas stocks favored by Korean retail investors are US stocks, with Apple Inc., Amazon.com Inc. and Microsoft Corp. the most held after Tesla.

The growing global presence of traders with limited experience and short investment horizons raises concern over the impact on securities’ prices. On one day in July, almost 40,000 Robinhood accounts added Tesla shares in a four-hour period, driving the stock up 16% before it closed 3% lower. With their stake in Tesla approaching 1%, herd-like Korean investors could cause a noticeable ripple in one of the world’s largest stocks.

The Asian nation’s traders have shown a penchant for risky moves, such as snapping up small-cap stocks and exotic derivatives. The rush of new traders has contributed to extreme market jolts, leading South Korean regulators to ban short-selling of shares on some exchanges.

"It is true Korean traders tend to seek a short-term profit," said Samsung Securities’ You. "So if volatility rises in markets, they could flee from Tesla’s stock en masse."