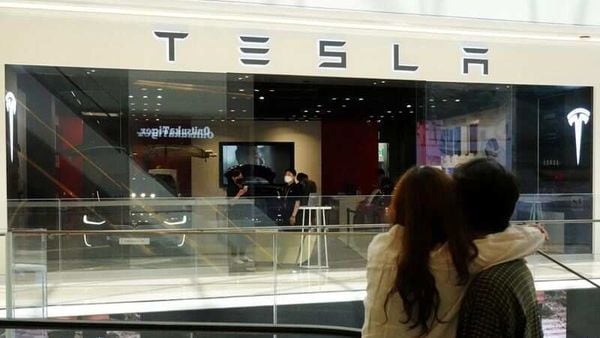 File photo - A couple looks at a Tesla dealership in Hanam, South Korea.

Tesla has raced to become one of the leading sellers of electric vehicles in South Korea. Making the most of the subsidies on offer in the country for EVs, the American company has become a strong player here and the Model 3 is selling like hot cakes, causing much concerns to rivals - especially the home-grown ones. Now, the South Korean government is reportedly looking at revising its policy on EV subsidies and may exclude premium brands which would also include Tesla.

According to reports in the Korean media, the government is slated to hold talks with representatives of around 11 car makers regarding the subsidies provided on EVs. This includes Hyundai and Kia. If the government does go ahead with its plans, it could prove to be a stumbling block in Tesla's charge.

As per reports, Tesla managed to corner 43% of all subsidies offered in South Korea in the first half of 2020. But if its cars are kept out of the purview of these subsidies, they would cost a whole lot more and the consequent - and potential - decline in sales would be obvious, irrespective of the enormous popularity of the brand and its products.

Korea Automobile Manufacturer Association notes that the Tesla Model 3 is now the most-imported EV in the country. There are some speculations that Tesla's rise here has spooked local giants like Hyundai and that alarm bells here are ringing loud and clear.

Many argue that the idea behind incentives is to put EVs on the roads and to exclude certain cars or car makers from the benefits not only hurts them but also mutes customer interest and defeats the real objective of ushering in electric mobility.