Demand is steadily returning to pre-Covid-19 levels with companies like Toyota, Mazda and Honda - among others - reporting better sales in June than in May.China is the world's largest car market and holds vital significance to fortunes of many international automotive companies.
By : HT Auto Desk
| Updated on: 06 Jul 2020, 10:59 AM 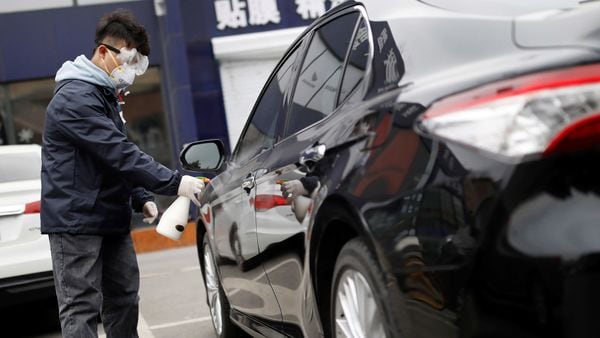 FILE PHOTO: A staff member disinfects a vehicle at a service centre of car-hailing service Didi Chuxing in China.

The world may be coming together to view China with a heightened degree of suspicion for a number of factors which range from its aggressive posturings to suspected Covid-19 cover ups but global automakers continue to eye the Chinese market with hopeful eyes. The world's biggest car industry and car market is reportedly showing signs of putting auto companies back on track with sales figures reviving even though there are concerns over a possible second wave of the pandemic here.

With auto sales either stuttering or only moving in the slow lane in many international markets, China has emerged for many auto makers as the best bet from where a revival can kickstart. Toyota, for example, sold 172,900 vehicles here in June and this was 2.7% higher than sales figures in May.

Honda managed to sell 142,363 units in June which may have been 4.1% less than its sales in June of 2019 but the year-on-year decline is reportedly coming down with passing months.

Interestingly, Japanese car maker Mazda managed to sell more cars in June of 2020 than it had in June of 2019. The company sold 21,002 units, according to local media reports.

Car component makers across the world may also be in no rush to snub China. A Bloomberg report highlighted how such companies in France are still banking on imports from the country. "Our final customers and auto-parts clients aren’t ready to pay more if our supply chains were relocated," Jacques Aschenbroich, Chief Executive Officer at car-parts maker Valeo SA, was quoted as saying. "So if neither of them put a value on the risk, there is no chance that supply chains will be relocated."

There are several factors at play from within too which may be having a positive impact on the Chinese automotive industry. The country claimed to have brought the Covid-19 pandemic under control around the time that other countries were entering lockdowns and witnessing a spike in positive cases. When the world was going into lockdown, China was gradually restarting its economic activities. Demand was also reportedly given some impetus with many cities offering incentives to people for them to buy new vehicles. Tendency to avoid public transit options may have also given some boost to demand for new vehicles.

There have been sporadic reports in the past several months about how international auto makers may look at taking production facilities out of China. Japan, for instance, has also been trying to provide a number of incentives for its own companies to ship out of China and expand here. The scale of the automotive industry in China and the fact that packing and shipping out is a costly exercise may prove to be big deterrents for international players.