Home Auto News Watch: What Happens When A Toyota Hilux Is Dropped From A Height Of 10,000 Feet?

Watch: What happens when a Toyota Hilux is dropped from a height of 10,000 feet?

Toyota Hilux was subjected to this drop-test to examine its strength and durability.The Hilux was dropped twice, first from a height of 500 feet followed by a massive height of 10,000 feet.
By : HT Auto Desk
| Updated on: 18 Jun 2021, 01:31 PM 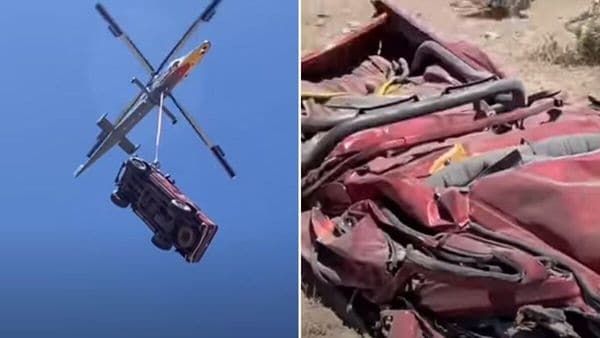 Collage of before and after images of the Toyota Hilux taken from the video posted on YouTube by WhistlinDiesel.

The sky is the limit for automakers and auto enthusiasts when it comes to testing the durability and safety of cars and neither of them hesitates to break the previous records. Members from WhistlinDiesel, a YouTube channel, went all out to test the strength of a Toyota Hilux by dropping it from a mighty height of 10,000 feet.

After driving the Hilux to an open terrain, a Kaman K-Max heavy-lift helicopter was all ready to take it to the sky. At first, the chopper took it to a level of 500 feet and released it. On the first crash, the hood of the Hilux hit the ground, jolting it to an extent that it was concluded that the frame was broken as the wheels of the car came closer.

It was immediately readied for a second crash-test where the car was taken up to 10,000 feet. When it was released, the car started spinning so fast that the GoPro camera mounted on it to record the impact, stopped recording. In the next 29 seconds, the pickup truck was on the ground as flat as a pancake. Despite the disastrous output, the team still showed interest in testing the engine's working condition.

Similar testing was done by Volvo last year where the Swedish carmaker took many of its SUVs to a height of 30 metres with the help of a crane and the vehicles were dropped multiple times. This test was conducted for the safety assessment of the company's cars.

It created a scenario resembling high-speed car crashes. In the test, the rescue team stressed on the priority of getting people out of the car in such accidents as most of the times they are in critical condition. They explained it to be the ‘golden hour’ after the accident where it is of utmost importance to take the victim to a hospital within one hour.