As seen in the video of the incident posted on social media, the glass roof of the Tesla Model 3 doesn't seem to have been shattered despite the falling of the tree.
By : HT Auto Desk
| Updated on: 13 Jun 2022, 06:01 PM 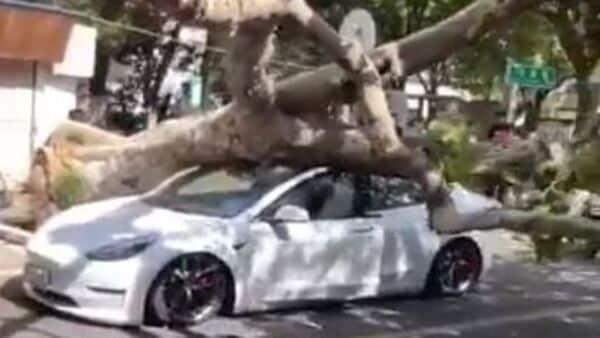 Screengrab of a video posted on Twitter showing a huge tree fallen on the glass roof of a Tesla Model 3.

A video has surfaced on social media showing a huge tree fallen on the glass roof of a Tesla Model 3 electric vehicle. The tree that was lining a street in a city somewhere in China fell onto the car when it was driving by. Interestingly, the glass roof of the Tesla vehicle doesn't seem to have shattered despite the falling of the tree. In fact, the driver's door also seems to be intact and there seems to be no dent on any adjacent part of the vehicle due to pressure from the tree.

As per a report by Insideevs, the driver did not suffer any injuries and got walk away safely from the car stuck due to the falling of the huge tree. Another fact to note here is that the tree doesn't seem to have any roots sticking out of it, which means that it had died out long time back but was left in the ground. Thus, its roots ultimately rotted away and it fell down on the vehicle.

Meanwhile in China, massive tree falls onto Tesla Model 3 glass roof driver walks away uninjured. @elonmusk once said that @Tesla Model 3 is the safest car in the world. $TSLA pic.twitter.com/uIqj25hIkr

The report added that when the US National Highway Traffic Safety Administration (NHTSA) tested Tesla Model 3 back in 2018, the safety agency concluded that the vehicle had the least potential of any injury when compared to all the other cars tested by the agency at that time.

At that time, Tesla had highlighted that the Model 3's roof would be able to withstand load that is four times its own weight with minimal deformation. After this incident, the claim seems to have been put to test in reality and has been proven quite true, if we go by the video quality available on the internet.

The Tesla Model S is claimed to have broken the NHTSA's roof strength testing machine, and the Model 3 is said to be an evolution of the Model S in terms of its structure, thus being stronger.