The Tesla Model 3 has been modified by Grind Hard Plumbing Co.The team also plans to add a roof tent and a spare tyre rack to the Tesla EV to take it to a new off-road level.
By : HT Auto Desk
| Updated on: 08 Aug 2021, 02:00 PM 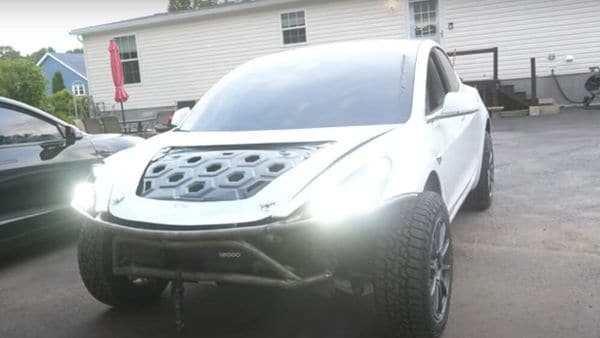 Screengrab from the video posted on YouTube by Grind Hard Plumbing Co.

Tuning cars to off-road versions have been in trend, but now since the automotive world is aggressively progressing towards electrification, electric vehicles too are undergoing an all-terrain makeover. A video has been posted on YouTube where one can see a Tesla Model 3 being modified into an ultimate off-road beast that looks straight out of a sci-fi movie.

In the video posted by Grind Hard Plumbing Co, one can see a salvaged Tesla Model 3 undergoing intense work. The team retrieved a Model 3 dual motor from an accident vehicle and bought the parts needed to restore it to its original state. They also worked to build a custom tube bumper that was later welded to the chassis of the electric vehicle. The Tesla car was also given suspension and wheels to increase its height.

The team also installed a 12,000-lb Badland Apex winch as the centrepiece. They also cut out part of the hood of the electric car that revealed the hexagonal holes present in it and has added lights behind it. The team completed the modification by adding a powerful LED that they connected to the turn signals.

The video has garnered comments praising the efforts of the team. One went ahead to share that this project was awesome and immensely cool whereas one said that he can buy a Tesla if it looked like this modified version.

(Also read | Tesla latest software update brings a plethora of features: All you need to know)

The team shared that the torque and the responsiveness of the electric dual-motor powertrain fit the modification and hence made the EV an efficient roadster. The team also plans to add a spare tyre rack, a full roll cage and a roof tent to take the Tesla electric car to a new off-road level.