The said car lift gets a secret trap door mechanism and once the owner is down in the garage, the lift completely disappears and merges with the driveway.
By : HT Auto Desk
| Updated on: 21 Feb 2022, 10:06 AM 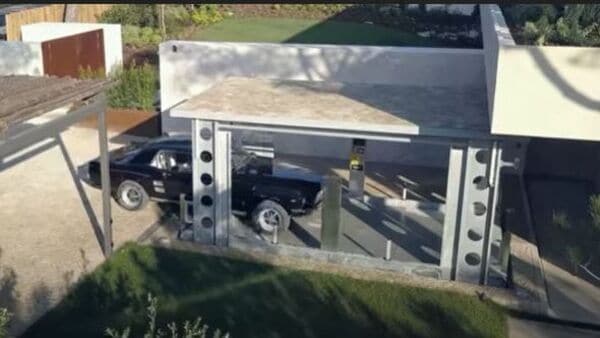 Screengrab of a video posted on YouTube by IdealPark

While secret passages and doorways in big mansions are a common thing, a luxurious villa nestled in the lap of the Portuguese Riviera, features a disappearing car lift that leads to the underground garage. The architects built the lid of the lift to match with the floor of the driveway so as to avoid visual obstruction.

In the villa called the Casa da Qinta da Marinha, the said car lift gets a secret trap door mechanism and once the owner is down in the garage, the lift completely disappears, merging with the driveway. The top of the disappearing car lift, along with being covered with the same material as the area surrounding, is also strong enough to be driven over. In case the owner simply wants to park outside for a moment, it can easily be done.

Installation of the disappearing car lift means that the architectural lines are unbroken by unsightly lifts, massive garage doors, or weird ramps. The villa was designed by Enter Arquitectura, and the architect based it on a logic of “well-defined vertical planes that structure and organize the house’s interior spaces." These combine with the exterior spaces of the beautifully landscaped property.

As per the architects of the mansion, the lift and the garage are connected by a security camera system that would prevent one from operating the lift while someone is standing on top of it. It also warns the person exiting the garage in case the path out of the driveway is blocked by something.

The IP1-CM MOB car lift is capable of lifting up to 2,700 kg (5,952 lbs), which is strong enough for a Rolls-Royce Cullinan. The top of the lift, meanwhile, has a maximum paving load of 150 kg/square meter (30 lbs/square foot). However, the price of the luxurious villa with unique car lift hasn't been revealed yet.