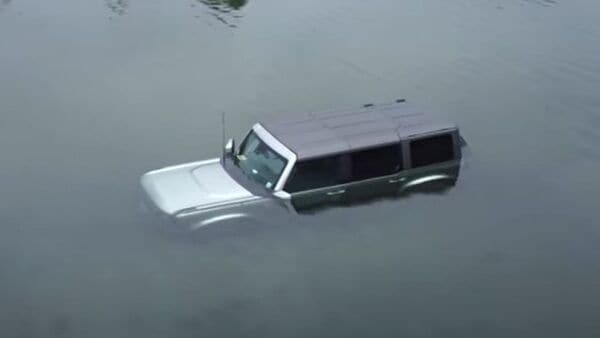 Screenshot taken from the video posted on YouTube by EveryDayDrones.

A video of a new Ford Bronco submerged in high tide has surfaced on the internet. The incident took place in Bar Harbor in Maine, where the Ford Bronco spent two days stuck in the sand and water. According to reports, the four-door Ford was trapped in a high tide last week and two attempts were made to rescue the vehicle which failed. It is being suggested that the owner of the Ford Bronco ignored warning signs to drive the car on the bar too near to high tide.

Reports claim that the owner also performed donuts on the sand before the car got stuck. However, these remain speculations as nothing has been confirmed yet. The Ford Bronco remained as is when the first attempt to rescue the car failed due to a snapped tow rope. The transmission and/or brakes were locked tightly. During this attempt, the tide rose up again.

The rescue team came back again on the following day and was able to drag the Ford Bronco by around 30 metres, but had to stop again as the high tide was making a comeback. After this failed attempt, the team is planning to bring a diver to return with airbags at low tide in an effort to float the car out of the water.

There is no report on how much damage the Ford Bronco has endured in the last two days staying submerged in the salty water.