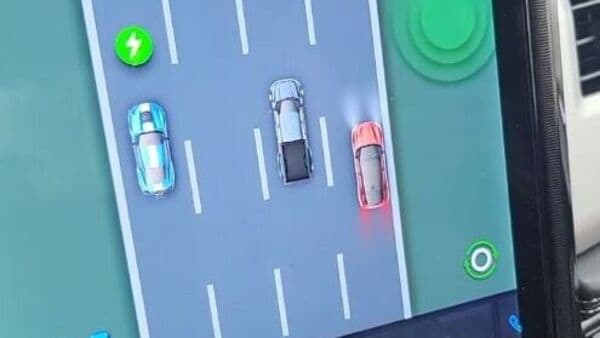 Ford Motor is gearing up to launch the F-150 Lightning pickup truck in the market on April 26, and the vehicle could come with a few tricks up its sleeve. Ford's Vice President of Global EV Programs, Darren Palmer, has hinted that the pickup will come with games that can be played on the vehicle's infotainment system. In a Linkedin post, Palmer showed a video of a racing game being played on the dashboard of the F-150 Lightning.

In the game, players seemingly drive a Mustang Mach-E and try to collect coins while avoiding traffic. The coins seem to give the players some points while increasing their range. The game can be seen being played on the pickup truck's available 15.5-inch infotainment system. Apparently, driving is controlled by turning the volume knob left or right.

This implies that the F-150 Lightning pickup will be launched with a handful of mini-games, which can be played when the truck is in parking mode and occupants have some time to kill.

By adding games to its dashboard as a source of entertainment, Ford is following Tesla's lead. The latter is a pioneer in gaming as their Arcade enables owners to play games with controllers, the touchscreen, and the steering wheel. Tesla also offers an array of different games such as Cuphead to classic Atari titles such as Asteroids, Centipede, Lunar Lander, and Missile Command.