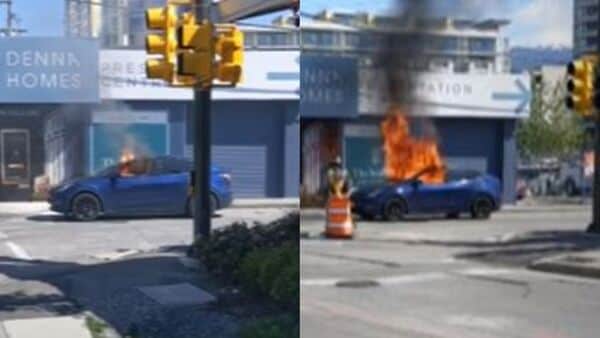 A video has surfaced showing a blue-coloured Tesla Model Y electric vehicle catching fire while on the move in Canada. While the owner was driving his electric crossover, it alerted him of an error, powered down, started smoking, after which it suddenly caught fire. He struggled to get out of the vehicle and having no other choice, had to break the window to escape from the burning vehicle, Teslarati reported.

The incident took place late last week and Jamil Jutha was take by surprise when he saw smoke coming out of his 2021 model year Tesla Model Y. He informed Teslarati that he had to kick through the driver’s door window to escape the vehicle fire. Flames emerged as he looked on while asking construction workers to help him direct traffic away from the vehicle. "I kicked through the window, climbed out, and called 911 right away," Jutha added.

The over 12-minute-long video of the incident taken by a bystander shows the Model Y parked in the middle of a public road with the entire driver’s door window completed dislodged but still hanging on to the vehicle. Smoke can be seen coming out of the cabin through the now-displaced window. In the background, Jutha can be heard saying, “It just said error, error, error."

The incident has surfaced at a time when there is an ongoing debate on whether electric vehicles are unsafe and more prone to catch fire. According to data from the National Fire Protection Association (NFPA) and the US Department of Transportation, there is a vehicle fire every 19 million miles traveled. Tesla cars are involved in a vehicle fire once every 210 million miles traveled, being a part of the national average by more than 11-fold in 2021.