While the owner could be heard laughing, the young bear gets startled by the falling off of the door and runs away from the scene.The pet bear and the Lamborghini Huracan both belong to a sheikh from UAE who is known for his love for cars and pet lions.
By : HT Auto Desk
| Updated on: 25 Nov 2021, 11:21 AM 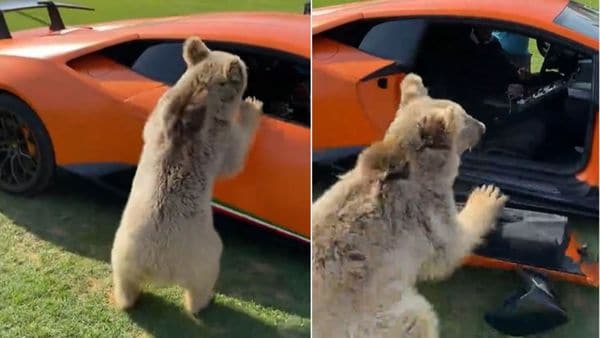 Screengrab of a video posted on Instagram handle of humaidalbuqaish

In a video that is doing rounds on the internet, a friendly pet bear playfully leaning on the door of a Lamborghini Huracan Performante, accidentally rips off the door of the bright orange sports car. What might sound unusual and strange to us, seemed like a normal event to the owner of the bear, who can be heard laughing in the video.

The pet bear and the Lamborghini Huracan both belong to a sheikh from UAE, Humaid Abdulla Albuqaish, who is known for his love for cars and pet lions. While the owner could be heard laughing, the young bear gets startled by the falling off of the door and runs away from the scene. It later comes back to the car to grab a fruit and then runs back off.

The video of the bear ripping off the Lamborghini's door has received over 78,000 likes within a day. A user commented on the video, saying, “That’s such a rich response." Others user comments read, “Guy has too much money" and “The poor thing (the bear) just wanted food."

The Arab sheikh's Instagram profile reveals that he owns some expensive vehicles such as Lamborghini Urus, a couple of Huracans, a Rolls-Royce Wraith, and a Nissan Patrol limousine. Also, this is not the first time that his pet bear has leaned on one of his expensive cars and scratched it with its claws. However, the sheikh doesn't seem to be worried about the the claws damaging the exotic cars' paint, bodywork or interior.

Various other videos from his Instagram profile show him playing with his pet animals such as lion, cheetah and the bear while sitting on the bonnet of his cars or sitting beside them.