Honda Aircraft Company claims that the light jet will not only go faster and higher than its other products but will also be at least 20% more fuel efficient than other lightweight jets.
By : HT Auto Desk
| Updated on: 14 Oct 2021, 08:38 AM 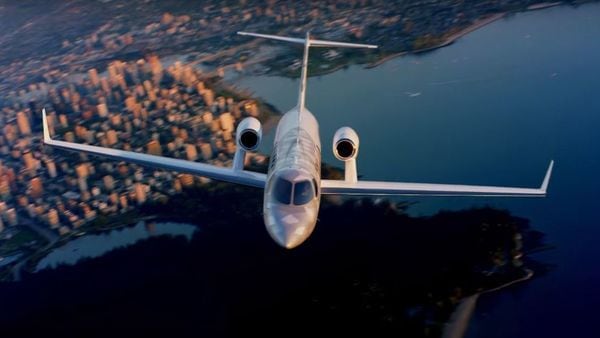 HondaJet 2600 Concept has been designed to be capable of transcontinental flight across the United States.

Honda has been making some sure-footed moves in the aviation business in recent times and recently showcased the HondaJet 2600 Concept in Las Vegas with the promise of a flying range of 2,625 nautical miles (approximately 4,800 kms) and enhanced fuel efficiency. This showcase comes shortly after the HondaJet Elite S luxury aircraft was also unveiled.

The HondaJet 2600 Concept and the HondaJet have several things in common even if the former is more capable and has a larger dimension. It has a length of 57.79 feet and a wingspan of 56.792 feet.

The HondaJet 2600 Concept has a maximum cruise speed of 450 knots and a maximum cruising altitude of 47,000 feet. There is 120 cubic feet of baggage space as well.

Honda Aircraft Company claims that the light jet will not only go faster and higher than its other products but will also be at least 20% more fuel efficient than other lightweight jets.

Those getting a seat inside can expect a plush experience with Honda offering three cabin layouts. The first layout offers four seats for passengers with two and two facing each other. The second layout has only two seats for a more exclusive experience. The third layout gets a couch apart from the four passenger seats.

Targeted at elite customers, the HondaJet 2600 Concept, if and when it does hit production cycles, can be a viable option to cover large distances without the need to halt for a re-fuel. And because of its improved efficiency, it could also prove to be a cheaper alternative when compared to lightweight or even mid-size private jets currently on offer.