Watch: A Ferrari Roma gets stuck in a narrow Italian alley 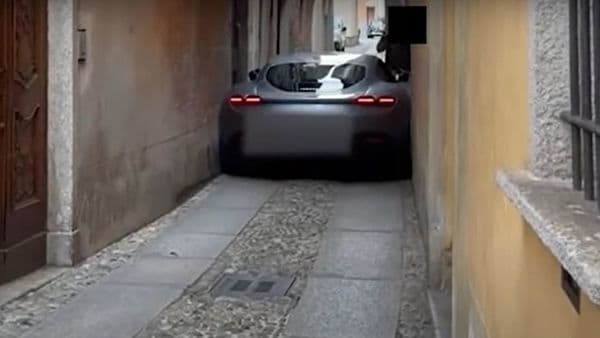 Screengrab from the video posted on YouTube by SupercarsNews.

Owners of supercars always try to stay as vigilant as possible to protect their vehicles as these not only cost them millions but also lead to extra expenditure in case of any mishap. However, this video that has caught the attention of netizens tells a different story. One can see a Ferrari Roma being stuck in a narrow Italian alley as the driver may have wrongly estimated that the supercar was capable to get through it.

A video has been posted on Youtube where the viewers can see the driver of a Ferrari Roma struggling to pull the supercar out of a tight lane. The judgement of the driver falls flat as Ferrari Roma is not a small car. It is 183.3 inches long and 77.7 inches wide. The car weighs 1,472 kg. Since Italy is known for narrow lanes and paths, one can only guess how the supercar will make its way through. Till now, there has been no report if the car has been taken out of the lane yet.

The supercar was launched earlier this year in India for a price tag of ₹3.61 crores.