Vietnamese car startup aims for what even Toyota, Hyundai didn't succeed at

Vietnamese auto startup VinFast looks to enter the US market with a bang.Pham Nhat Vuong, a Vietnamese billionaire, is looking at exporting electric vehicles to the US and has even invested $2 billion of his own fortune to reach that goal.
By : Bloomberg
| Updated on: 11 Dec 2019, 09:09 AM 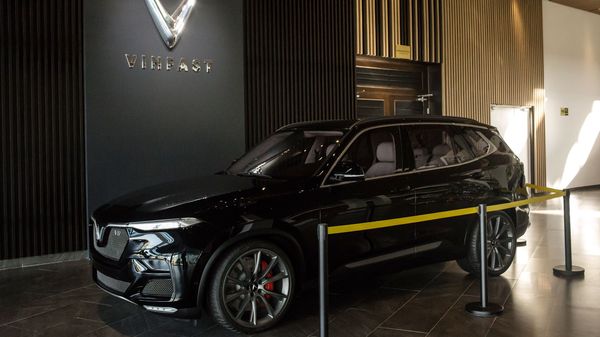 A prototype of the Vinfast Lux V8 sports utility vehicle (SUV) sits on display at the automaker's factory in Haiphong, Vietnam.

The billionaire behind six-month-old Vietnamese auto startup VinFast plans a feat even Toyota Motor Corp. and Hyundai Motor Co. couldn’t pull off during their early days: sell a car in the U.S.

Pham Nhat Vuong, the Southeast Asian country’s richest man and now in charge of the new automaker, is so intent on exporting electric vehicles to the lucrative American market in 2021 that he’s plowing as much as $2 billion of his own fortune to reach that goal. His cash would account for half the capital investment of VinFast, which began delivering cars to Vietnamese consumers with BMW-licensed engines earlier this year and aims to expand into electric vehicles.

“Our ultimate goal is to create an international brand," the 51-year-old tycoon said in an interview at the Hanoi headquarters of the car company’s parent Vingroup JSC, which Vuong founded and holds the title of chairman. “It will be a very difficult road and we will have to put in a lot of effort. But there’s only one road ahead."

The homegrown cars made under Vuong’s sprawling real estate-to-hospitals conglomerate faces an uphill battle to succeed overseas: carmakers such as India’s Tata Motors Ltd. and Malaysia’s Proton Holdings Bhd. struggled to win over consumers away from their home turf. Even in Vietnam, VinFast Trading and Production LLC has formidable competition from established foreign players such as Toyota, Ford Motor Co. and Hyundai.

Shares of Vingroup fell 1.2% as of 9:37am local time, poised for its lowest close since July 15. The benchmark VN Index of Vietnamese stocks dropped 0.3%. 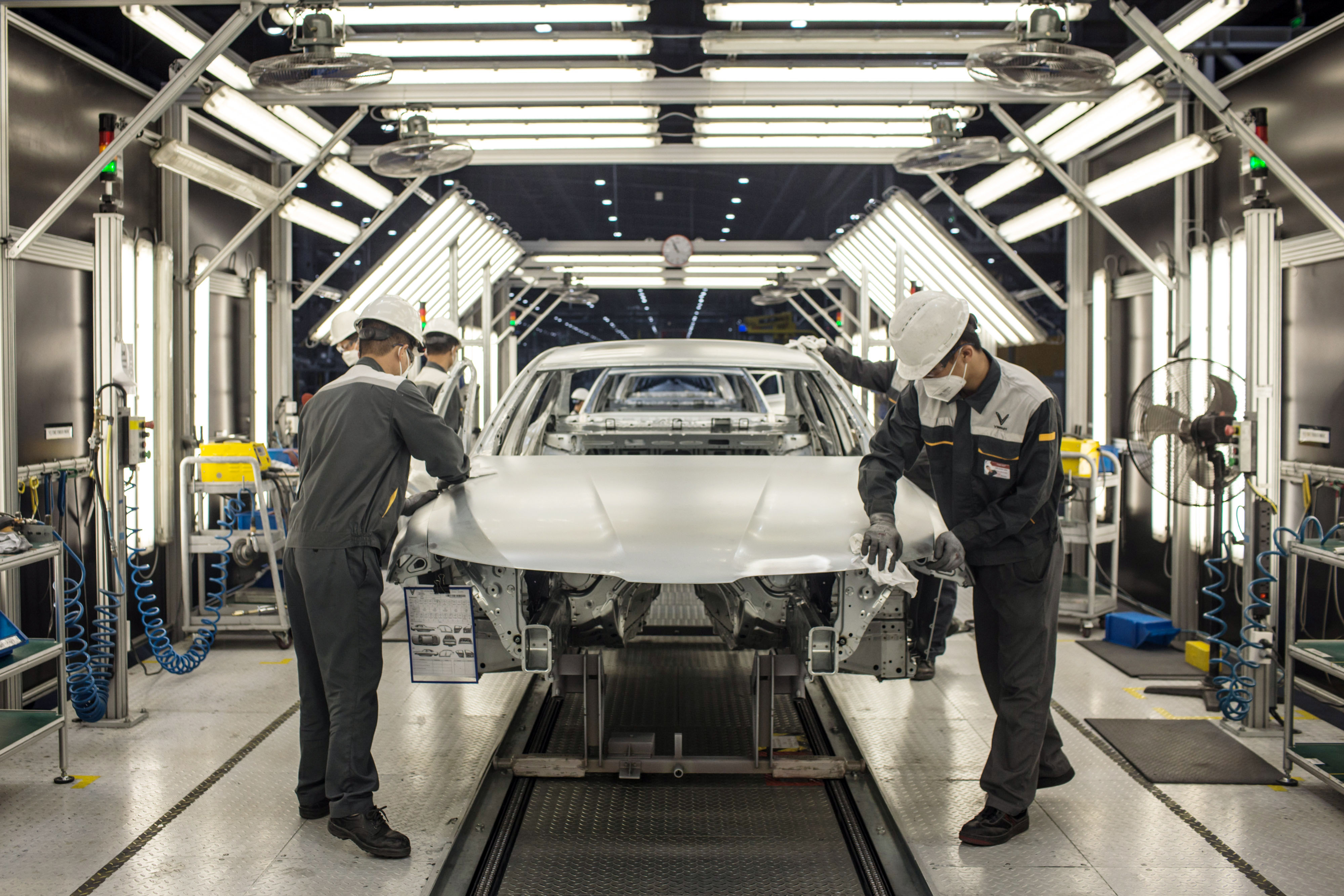 Workers clean the hood of a body frame of a Vinfast Lux A2.0 sedan in the body shop area of the automaker's factory in Haiphong, Vietnam. (Bloomberg)

VinFast follows a long list of Chinese automakers that have also had ambitions to sell vehicles in the U.S. going back more than a decade. Though the plans have yet come to fruition, Guangzhou Automobile Group Co., Zotye Automobile Co. and others have set up local sales units and research-and-development operations to show just how serious they are. Some Chinese brands have also exhibited at American auto shows in recent years.

The tycoon, whose net worth is $9.1 billion, according to the Bloomberg Billionaires Index, is undaunted. Vingroup sold some shares last year and Vuong plans to sell as much as 10% of his own shares to raise funds for the ambitious project. He owns 49% of VinFast, while the parent, Vingroup, holds 51%.

The automaker won’t be profitable for as many as five years, said Vuong, adding the local market is “too small" and overseas sales are key to becoming profitable. Vuong directly owns 26% of Vingroup, according to Bloomberg data. Vietnam Investment Group JSC, in which Vuong has about a 92% stake, holds 31.6% of Vingroup.

And VinFast will have to overcome an even more daunting task of winning over demanding consumers in the U.S. and other developed markets, where emissions and crash standards are stringent.

Adding to these challenges is successfully manufacturing and selling electric vehicles. Many Chinese startups, backed by billions of dollars in funding, bet on the prospects for EVs in the world’s biggest auto market, but few are making money. BAIC BluePark New Energy Technology Co., China’s biggest maker of pure electric cars, forecasts a 2019 loss. Unprofitable NIO Inc., which is traded in New York, has struggled to assuage concerns that it’s running short on cash amid sputtering EV demand.

VinFast’s first EV won’t roll off its assembly line until late next year, but Vuong said he plans to export those vehicles to the U.S., Europe and Russia in 2021.

VinFast must clear several high hurdles to compete outside Vietnam, said Michael Dunne, chief executive officer of automotive consultant ZoZo Go LLC, which specializes in the Asian market. “It will be some time before the company is ready to compete in the U.S. -- still the world’s toughest market," he said. “You need a solid brand name."

Many consumers prefer a second-hand Honda Motor Co. or Toyota vehicle over a new car with an unfamiliar brand name, Dunne said. The Vietnamese automaker will need to produce at least 100,000 vehicles a year to be cost competitive, develop a global brand and establish a parts-and-services network, he said. Still, VinFast has an opportunity to crack smaller Southeast Asian markets, Dunne added.

VinFast, which operates a 335-hectare factory in the northern port city of Haiphong, is selling its first line of vehicles -- a hatchback, sedan and SUV -- at below cost. The hatchback retails for the equivalent of $17,000, while the four-cylinder sedan goes for $47,400 and its SUV is offered at $60,400. The company targets production of as many as 500,000 vehicles a year by 2025. The carmarker also makes electric scooters. The handlebars of a Vinfast Klara electric scooter. (Bloomberg)

In the next few years, Vingroup will have to spend “many trillions of dong per year" to cover losses for VinFast, estimated at as much as 18 trillion ($777 million) annually, Vuong said. Those losses include financing and depreciation, and as much as 7 trillion dong each year to absorb the hit of selling cars below cost, he added.

Vingroup will divest stakes in other units to fund VinFast while other subsidiaries have been ordered to reduce costs, Vuong said, without providing details. VinFast will also seek additional loans, in addition to about $1.95 billion of international loans it has already raised. Vuong also plans to list VinFast on a Vietnamese exchange and possibly overseas, he said, without elaborating.

“We have the desire to build a Vietnamese brand that has a world-class reputation," he said. “Our biggest challenge is that Vietnamese products do not have an international brand. To many international friends, Vietnam is still a poor, backward country. We will have to find a way to market and prove our products represent a dynamic and developing Vietnam that has reached the highest standards of the world."