Home Auto News Video: This Car Might Get A Rotating Infotainment Screen

Video: This car might get a rotating infotainment screen

Acura MDX has received the rotating touchscreen display for testing purpose.
By : HT Auto Desk
| Updated on: 08 Aug 2021, 10:45 AM 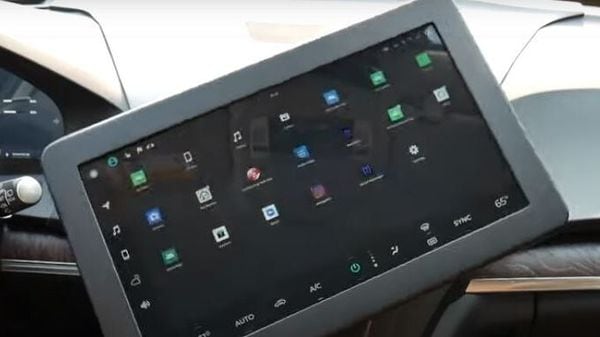 The touchscreen infotainment display can change orientation with just a touch of a button. (Image: Youtube/Autoline Network)

Automakers nowadays are toying with different shapes and ideas for in-car entertainment systems. Finding a huge touchscreen infotainment system at the centre of the dashboard has become common. Automaker like Mercedes-Benz is toying with the idea of using multiple screens with its MBUX Hyperscreen.

Mitsubishi Electric has developed a rotating touchscreen display for Acura MDX. As the company says, this is a digital cockpit concept that could make its way into future cars. Termed as Project Firebird, the display offers the users a choice between landscape and portrait orientation, as per their preference.

With this, some apps can be viewed better in portrait mode. For example, navigation is better viewed when used on a vertical display rather than on a landscape screen.

The particular touchscreen infotainment display gets thick bezels. The Project Firebird also comes with cameras. These include an inward-facing camera for the driver monitoring system. It can be used for video chats as well, as Mitsubishi Electric claims. Virtual meetings and mobile offices have become significantly important during the Covid-19 pandemic. The inward-facing camera inside the cabin of the car will allow the users to make or join a call from inside the car only.

According to Mitsubishi Electric, this technology is currently being used for testing in Acura MDX. It would be available for the mass market and other automakers in the next two years.