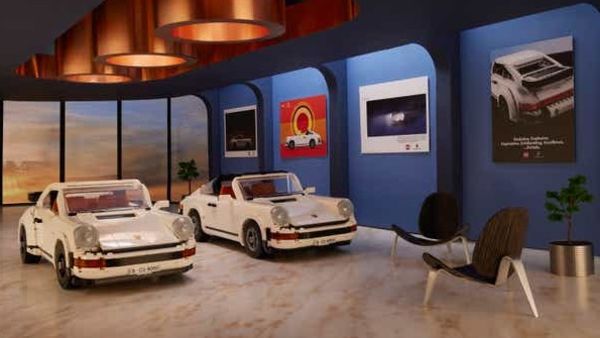 LEGO Group has joined hands with Porsche to unveil the two-in-one Porsche 911 Turbo and 911 Targa toy set. The LEGO set can be built either as the fixed roof 911 Turbo model or as the open-roofed 911 Targa at one time, allowing builders to choose between classic coupe or convertible style.

The 1,458-piece toy car features all the hallmarks of their elder siblings such as the aerodynamic shoulder line, angled headlamp, sculpted bonnet with Porsche badge and rear-mounted flat six ‘boxer’ engine. It measures 10.8 cm in height, 16 cm in width and 35.5 cm in depth.

In both the versions of the model, the 2+2 sports seats and dashboard are finished in dark orange and nougat - an eclectic colour scheme based on contemporary upholstery options from the Porsche 911. Other interior details include a handbrake, gearshift and functional steering. The front seats also tilt forward for access to the rear bench seats. The LEGO Porsche 911 Targa features Targa badging and a brick-built wraparound rear window. The iconic Targa Bar completes the look. The model's roof is fully removable and can be stowed underneath the hood of the car.

The uniqueness of this toy set comes with the fact that Porsche enthusiasts will not have to choose between owning a coupe or a convertible. "While designing the car, the hardest decision to make was whether we would make the Turbo or Targa variant of the car," said Mike Psiaki, Design Master at the LEGO Group. "It was such a tough call that we engineered the ability to build the LEGO Porsche 911 Turbo and Targa from a single set."

The first few buyers of the LEGO set will be offered a chance to receive a limited-edition LEGO Porsche owners pack. The pack contains a certificate of ownership, an official LEGO Porsche card wallet and a set of four unique art prints based on contemporary Porsche 911 adverts, all of which will be presented in a smart collector’s wallet. The offer is valid for the members of LEGO’s free VIP loyalty program. These members can book the LEGO set from February 16th on LEGO.com.