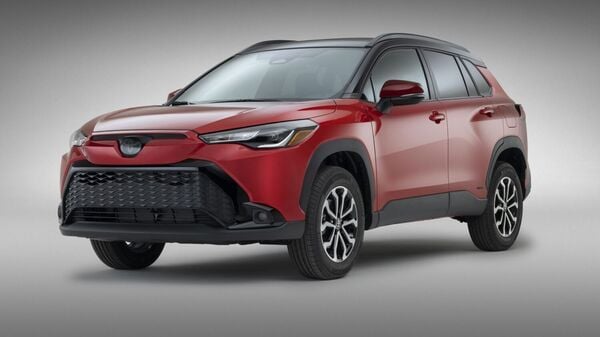 Toyota has planned to assemble the new Corolla Cross hybrid at its new Mazda Toyota Manufacturing factory in Alabama, United States. Under the hood, the all-new Toyota Corolla Cross hybrid's electronic all-wheel-drive system generates power out of 194 hp. The car can touch the speed of 100 kmph from standstill in about 8 seconds. Toyota said that the new hybrid model will come in three new trims along with LE and XLE. These new variants will be named S, SE and XSE.

Toyota Corolla Cross hybrid SE variant will feature privacy glass, roof rails and paddle shifters along with a standard Blind-Spot Monitor (BSM) and Rear Cross Traffic Alert (RCTA) while the new XSE trim that promises to be the sportiest one in the lot will have additional features topping the ones in SE. It will sit on 18-inch alloy wheels, will have premium LED headlamps, taillamps and fog lamps and softex-trimmed seats with the addition of heated front seats and a power driver’s seat.

The new Toyota Corolla Cross hybrid's interior is spacious and offers similar features as its sedan and hatchback siblings. In higher trims, if one wants the model can be outfitted with a power moonroof, as well as either single or dual-zone automatic climate control along with standard heating and air conditioning vents for rear-seat passengers. The Toyota Multimedia System, Wireless Apple CarPlay and Android Auto and added USB-C charge ports for gadgets will be a standard across all Corolla Cross hybrid trims. The new model will also feature Toyota Safety Sense 3.0, which is the automaker's suite of active safety systems, as a standard offering.